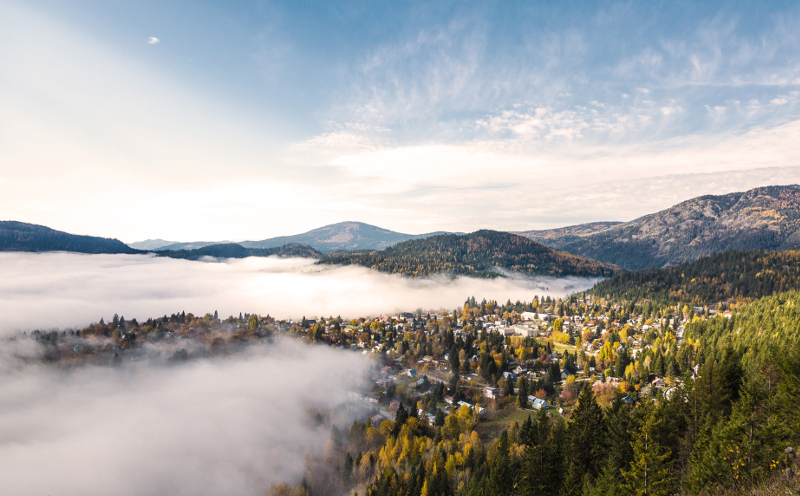 Indeed, it’s often the summer months that turns B.C. visitors into residents. Downsizers, part-timers, people looking for a legacy property for the grandkids–there are many good reasons to relocate to these four-season resort towns. A recent RE/MAX survey of Western Canadians conducted by Leger revealed that 71 per cent of those interested in purchasing a mountain property are looking for all-season resort capabilities. Here are seven places that fit the bill.

Tucked into the Selkirk Mountains several hundred metres above the mighty Columbia River, Rossland is a throwback to the glory of silver mining, with heritage buildings first built in the 19th century (and since lovingly restored). Find mine shafts and old shacks on the slopes of Red Mountain, just west of town. Early Norwegian immigrants held ski-jumping contests as far back as 1908, and Red Mountain’s steep slopes have produced many members of Canada’s national alpine ski team.

SUMMER FUN: The summer months see a slowing of activity from the downhill skiing action, but you won’t see the locals gathering any moss, however. Meet them at the weekly Farmers Market on Thursdays, or join the Friends of the Rossland Range Society, to participate wilderness activities and help maintain local cabins and warming shelters. Craft beer from award-winning Rossland Beer Company helps lubricate summer adventures, too.

LOCAL’S CHOICE: Ultra-fit mountain bikers can tackle the 35-kilometre Seven Summits trail, which rolls along a series of peaks in the Rossland range.

NEW DEVELOPMENT: Redstone, the community next to the eponymous Les Furber-designed golf course, has three-bedroom town homes from $399,000.

Located at the crossroads of the Trans-Canada Highway and B.C. Provincial Highway 95, Golden actually attracts more visitors from Alberta than British Columbia. This pretty mountain town is an easy drive to Glacier, Banff and Kootenay National parks.

SUMMER FUN: Golden becomes a new kind of adventure sport playground in the summer. The frothing rapids of the Kicking Horse River draw whitewater kayakers and commercial river-rafting companies. Paragliders drift lazily on rising columns of air (known as thermals) from a launch point on Mount Seven, a short drive from the centre of town. It’s also the jumping-off point for many fly-in, remote alpine lodges, such as the elegant Purcell Lodge. You don’t need a helicopter to find great views, though. The half-hour drive to Kicking Horse Mountain Resort leads to one of Canada’s most spectacular high mountain restaurants, the Eagle’s Eye.

LOCAL SECRET: Visit Edelweiss Village, a collection of six alpine cabins built in the early 20th century to house Swiss guides employed by the Canadian Pacific Railway to take well-heeled rail tourists on hikes. The former home of famous guide Walter Feuz has been lovingly restored with his own memorabilia.

Revelstoke lays historical claim to two of Canada’s most significant public works projects: the Trans-Canada Highway and the Columbia River dam. Canada’s most rugged alpine scenery is found near the top of Roger’s Pass in Glacier National Park, and Mount Revelstoke National Park holds one of the very few places where you can drive right to an alpine meadow–no hiking required. Revelstoke is a true railroad town, housing families directly tied to the transportation industry. It even has a railway heritage museum with a painstakingly restored steam engine.

SUMMER FUN: Revelstoke has benefitted from telecommuters and other professionals moving here to escape city noise, traffic and the high cost of housing. Since the opening of Revelstoke Mountain Resort more than a decade ago, the town’s fortunes have also been boistered by small businesses such as Mount Begbie Brewing Company and a host of new restaurants in its revived downtown.

LOCAL SECRET: Revelstoke boasts outstanding single-track trails that don’t require the lung capacity of an Olympic athlete to enjoy. West of town, across the Columbia River, 40 kilometres of trail suitable for all abilities have been designed and maintained by the local mountain bike club.

Nestled in the Elk Range, a sub-range of the Rocky Mountains, Fernie is one of the rare B.C. resort towns that has successfully balanced the needs of tourism, a regional service economy and traditional resource extraction. (Teck’s massive coal mine is less than an hour away.) The bowls and trails of nearby Fernie Alpine Resort tower over the town but, come summer, Fernie’s valley attractions become more abundant. The town is steeped in rich mining history and many of its downtown businesses retain heritage facades of red brick and limestone, as does its courthouse.

SUMMER FUN: Fernie is as fanatic about one summer activity as anything that happens in the winter–and that’s fly fishing. There are at least three top fishing guides in town, and if you’re feeling cocky you can always try and find secret spots on your own. Once the snow clears from the high alpine passes, Fernie also boasts one of the most spectacular long-alpine hiking trails in the province: 21-kilometre Heiko’s Trail is named for Heiko Soicher, the one-time owner of Fernie Alpine Resort; with 1,200 vertical metres in elevation gain, it’s not for the faint of heart.

LOCAL’S CHOICE: Splurge on a trip to nearby Island Lake Lodge, a five-star mountain retreat that is known as much for its cuisine as it is for its fantastic hiking trails.

Named after the legendary South African mining property, this town of 7,500, located just below North Star Mountain, was tied directly to the Sullivan mine, the world’s largest silver and lead operation. Since the mine closed in 2001, Kimberley has weathered an outflow of workers and their families, but flattened home values have created fantastic opportunities: for telecommuters or those with jobs in Cranbrook, about a half-hour drive away. In what is surely a sign of the times, the old mine site is now home to a photovoltaic solar farm.

SUMMER FUN: Due to its higher elevation, Kimberley has a cooler, somewhat wetter climate than communities in nearby Columbia Valley. That makes perfect golfing weather at one of the five golf courses within an hour drive of town. Because the ski resort demands plenty of accommodations, staying in Kimberley is surprisingly affordable. The so-called Bavarian City of the Rockies has an architectural style that is reminiscent of the Alps, with a pedestrian-only platzi in the centre of town bustling with cultural activity (such as a talented theatre guild) in the summer.

In the mid-1990s, the resort-development world was shocked when Olympic gold medalist Nancy Greene-Raine and her husband, former National Team coach Al Raine, pulled up stakes and moved away from Whistler, where they had been successful owning and operating the Nancy Greene Olympic Lodge and playing a role in the municipality’s growth. They left for Sun Peaks, where they’ve repeated the same successful pattern: redeveloping and building a thriving resort community out of the B.C. wilderness.

SUMMER FUN: Summer activities bloom with Sun Peaks’ fabulous display of alpine wildflowers, beginning in early July and reaching full glory about three weeks later. A fine network of walking and hiking trails fans out across Mount Tod. In some places, the flowers grow to knee or waist high. There’s a highly regarded 18-hole golf course and there are mountain bike trails for both downhill free riders and cross-country enthusiasts. While many employees are winter seasonal, a core community of Sun Peaks residents keeps an informal calendar of barbeques, fundraisers and social events over the summer.

LOCAL’S CHOICE: In need of a refreshing swim in a mountain lake after a demanding day at the bike park? Drive down towards Heffley Lake, a peaceful, clear body of water with outstanding fishing and a small beach accessed from an adjoining Forest Service campground.

Until the early 1980s, the only summer visitors Whistler received were ski racers training on a small glacier that has long since melted. That all changed in 1980, when trails were cut on Blackcomb Mountain and a brand-new pedestrian-only village boomed, filled with designer boutiques, art galleries and restaurants.

SUMMER FUN: It’s easy to see why Whistler now attracts more visitors from Victoria Day through Labour Day than it does during the winter–there’s so much to do. Nicklaus North, the Whistler Golf Club and the Fairmont Chateau Whistler are three of the best mountain courses in the world. Stand-up paddlers, canoeists, kayakers and floating beach toys can be found on Alta, Alpha and Lost Lakes. As for mountain biking and hiking, hundreds of kilometres of single track, machine-made trails loop around the Lost Lake Nordic Centre and the high alpine trails in Garibaldi Provincial Park. Whistler’s glamorous profile gets a dramatic boost every time a TV show like The Bachelor rolls into town.

LOCAL SECRET: If it’s raining, seek out the action-packed exhibits at the Whistler Museum. It celebrates early fishing days of Alta Lake Lodge, the pioneering skiing/climbing community and milestones like the 2010 Olympic Games. For world-class art and architecture, check out the Audain Museum.