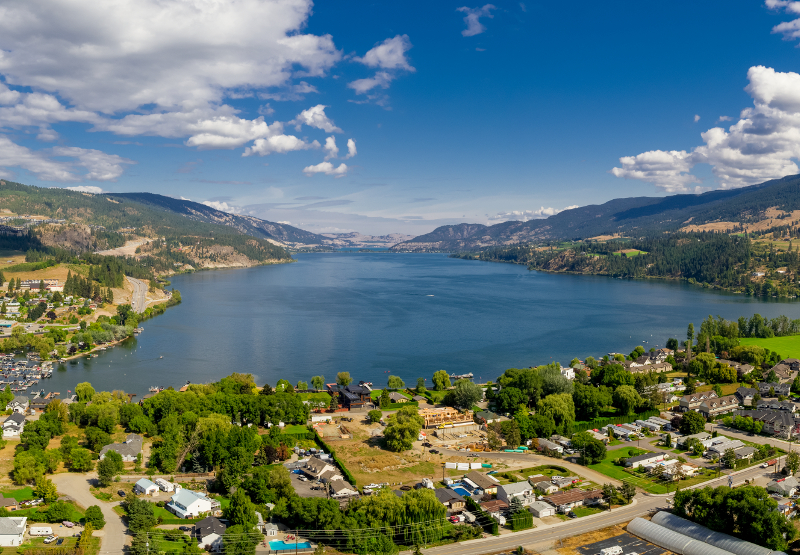 The waterfront of Wood Lake in Lake Country. Photo courtesy of Troika Development

In B.C., not only is waterfront living possible and affordable, the opportunities are almost too numerous to mention. Whether you want your waterfront retreat to be within mountain wilderness, flat desert or pristine forest, chances are it’s available. Here is our round-up of the best new waterfront developments and our favourite waterfront communities.

Twenty-five two- and three-bedroom town homes with rooftop terraces have a blend of contemporary and modern beach house elements–entirely appropriate, considering Troika Developments has situated this cozy community at the southern end of Wood Lake, overlooking the Okanagan Valley.

Water feature: The Landing is part of Lake Country, one of the fastest growing municipalities in the Okanagan.

The Cottages on Osoyoos Lake, Osoyoos

The Cottages, on the shores of the famously warm lake, give full access to the swimming, boating, water-skiing (plus winter skiing and nearly year-round golf) the area is known for. The homes themselves exhibit classic architecture and are being built with life’s simple pleasures, rather than lavish lifestyle features, in mind.

Water feature: The Cottages have direct access to a sandy beach and marina, and nearby Vaseux Lake provides great fishing for large-mouth bass and rainbow trout.

This 45-acre community on the west shores on the Okanagan Lake is a single- and multi-family home development with 500 feet of sandy beach, an outdoor pool/spa, and a future recreation centre. It’s close to vineyards, farmers markets, dining and shopping.

Water feature: The Mediterranean-inspired designer homes are augmented by boat slips and nearby marina access.

Experts: West Harbour was created by Troika Developments of Kelowna, commited to building communities that enhance and protect their surrounding environments.

Ranch land, mountain vistas and gently rolling landscapes are just some of the scenic attractions for residents of this master-planned community located above the shores of Kamloops Lake in the Thompson Okanagan. Tobiano is being called “home ownership with an 18,000-acre backyard.”

Getting around: Homes at Tobiano are grouped into four neighbourhoods, connected by landscaped walkways and riding paths.

This master-planned community boasts an unbeatable location: on the hills above Skaha Lake. The Vistas is the development’s third neighbourhood offering and consists of one-level terraced rancher living spaces with the amazing views that the Skaha region is famous for.

The 872 acres of protected landscape, designated parks and trails and a gorgeous slice of waterfront make this a prime Okanagan lifestyle community. Among the various residential developments in this area, Beachhouse is a limited offering of lakeside town homes and condos combined with boutique commercial space.

Water feature: A kilometre of sunny beach on the east shores of Okanagan Lake.

This series of homes (each with its own private elevator and rooftop patio, in addition to contemporary open design living areas with nine-foot clear-span ceilings) is located in Kelowna’s trendy Lower Mission. This means the best of both worlds for residents, who can just as easily go to the beach for a swim as they can enjoy the more than 55 neighbourhood shops and 26 nearby places to eat.

Work ease: Some units have been designed for home-based businesses and have separate entrances.

Nestled between the shores of Okanagan Lake and a vineyard, 22-acre Paradise Estates was purchased in 2015 by Gasland Properties Ltd. It transformed the property into a community with 21 homes crafted around sculpted green landscaping and natural rock outcroppings.

Water feature: A communal recreation area with a water feature and fireplace is the meeting point for residents; private boat slips and a sandy beach are at the doorstep.

In and out: The home designs make the most of their surroundings: collapsible doors invite the outdoors in, while private rooftop hot tubs provide views of the lake and mountains.

Once a quarry, this site is becoming a modern seaside community on a 419-acre plot with 1.3 kilometres of spectacular shoreline. The Royal Bay Community is creating a safe and walkable community for everyone from first-time buyers to seniors. A secondary school and walking trails have been developed, with shops, services and other amenities to come.

Water feature: A beach park has already been built as part of the master plan.

This area in the Comox Valley (between Comox and Campbell River) is home to nearly five kilometres of soft sand beaches bookmarked by two provincial parks–a haven for vacationers for decades. With the 34 beautifully crafted cottages coming soon, a new generation of residents can enjoy a lifetime of vacations.

Water features: Because the beach continues for well over a mile into the Strait of Georgia, the waters are warm, shallow, and great for swimming, plus free of powerboat traffic or strong currents.

Set among the rolling hills leading directly to the bay’s waterfront (northwest of Nanaimo), this community has amenities such as award-winning golf, a private wellness centre and walking trails. Seven hundred homes have been carefully developed here, with plans for 2,100 more spread across 750 acres.

Water feature: A full-service marina at Schooner Cove and picturesque views of the Georgia Strait and coastal mountains are part of the package here.

Location: The landscaped home lawns and the manicured fairways of the Fairwinds Golf Club contrast with natural rocky terrain.

This collection of cottages and surfside yacht suites are anchored on a solid rock peninsula on the southwest tip of Vancouver Island. Residents can go diving just below their decks, and the homes are situated around a planned village centre with retail and commercial space.

Water feature: Landus Development Group Inc. is creating a true ocean community: residents see only water when they look out their windows.

Perks: The homes are built seven metres above and set back five metres from the sea.

This seaside community consists of two developments: Water’s Edge Cottages and Creekside Cottages, both of which take full advantage of Port Renfrew’s unique lifestyle. It has been described as a place to hang your fishing rod or grab your surfboard–an outdoor mecca full of rivers, tall trees and hiking.

Water feature: The village is centered around the local wharf.

Options: Choose from a mix of comfortable cottages and larger custom oceanfront homes.

Focus Equities is creating a truly unique waterfront community by combining a revived historic rail yard with a mix of residences: four towers (the fourth is now in previews) comprise 1.5 million square feet of residential space, and residents will enjoy the amenities of 70,000 square feet of commercial space.

Water feature: Bayview’s districts are oriented along Victoria’s Inner Harbour, and many of the residences have spectacular ocean views.

Perk: Downtown Victoria is only a 10-minute walk away.

The juxtaposition of ancient forest with sparkling ocean is the lure of this authentic seaside village located on the shores of the Salish Sea. The developers created a picture-postcard village in a forest clearing, with homes built to the water’s edge and augmented by narrow roads, low fences and other features that encourage human interaction.

Water features: Aquatic opportunities range from boating (a marina is located at the base of Spirit Bay village) to scuba diving.

Hotspot: Jacques Cousteau named nearby Race Rocks one of his favourite scuba spots on the Northwest Coast.

Think B.C. waterfront, and you might picture a community nestled amid a network of piers and pylons, foot bridges and twisting walkways–precisely the experience provided by this spot in Gibsons Landing, gateway to the Sunshine Coast. It’s a collection of one-, two- and two-bedroom-plus-den homes.

Water features: A full-service marina plus the perks (concierge services, fitness facility, fine dining) of the future George Marine Resort Hotel will be at your service.

Getting around: A brand new seawalk will connect the residences, the hotel and the marina to Gibsons.

Water features: Nearby Snickett Park on the Sechelt waterfront is the place for beach lovers.

Perks: The charm of Sechelt’s shops and restaurants is augmented by a regional hospital and other services.

Surrounded by marine areas, provincial parks, and pristine shoreline. Sechelt has long been coveted as a hotspot for Sunshine Coast recreation. This beloved artisan community is also a vibrant retail and entertainment hub–which is why ONNI decided to develop this private enclave of three- and four-bedroom beachside Craftsman-style town homes.

The foothills of Bowen Island’s vast Crown Lands and ecological reserve facing Seymour Bay are a key contributing factor to the beauty and security of this master-planned community of homes, town homes, cottages and cluster housing–also located close to a nine-hole golf course with ocean views and two tranquil neighbourhood beaches.

Getting around: A future passenger ferry will put Vancouver a half-hour away; West Vancouver is 20 minutes away via the Bowen Island Ferry.

Number of units: To be determined.

Located an hour east of Vancouver and just south of Chilliwack, Cultus Lake is the largest freshwater lake in the Fraser Valley and a mecca for summer recreational activity. The resort-style residences here, with private docks and on-water recreational pavilion, take full advantage of the pristine surroundings.

Water features: Each home faces the lake and, in addition to parking for two vehicles. comes with a boat slip and freehold title.

Getting around: While Vancouver is an easy drive to the west, Lakeside residents have even quicker access to the farms, villages, nature parks, and burgeoning urban centres of the Fraser Valley.

Here are some of our favourite waterfront towns and cities in B.C.

Campbell River
Waterfront: Discovery Passage
Move for: Fishing in the salmon capital of the world.