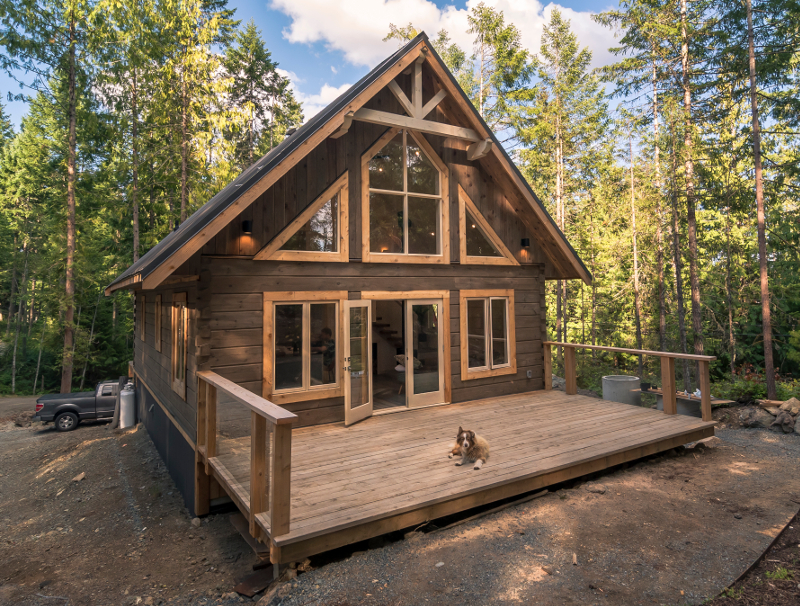 Every person’s dream home build is as unique as the budget they have to devote to it. With these pointers from a savvy client and insider advice from experts and builders, here’s how to do the budget and the build right.

The owner of a small log cabin home on Vancouver Island’s Shawnigan Lake had built her first place 20 years ago. “Where we are in Shawnigan Lake, the [rental] vacancy rate is practically zero,” she says. “At the time, 20 years ago, I needed somewhere to live that wasn’t my parents’ place, and the only option was to build myself a house.” So she put up a small cabin and lived there until life took her to Australia, where she went to raise her young family.

But she never felt like work on her 2.75-acre lot was complete. and when she was called back to Shawnigan Lake after the loss of her father, Goodwin had time one her hands and the motivation to finish what she started. “The property I bought was zoned to have two residences, and I always felt like it was unfinished,” she says. “I figured I might as well build a house.”

To keep her costs lower, Goodwin chose a pre-assembled log cabin like her first, which she purchased through Discovery Dream Homes. “Because I’d built one before, I knew what I was getting myself into,” she says. “Everything was taken care of and it sounded simple–I’d just assemble the house like Lego,” she laughs.

Goodwin chose a milled-log system, which goes up faster than a traditional house because the “log wall is your finished exterior and interior wall,” says Danny Mauro, design and consulting associate with Discovery Dream Homes West, who gives a range of $110 to $120 per square foot for that type of structure. Mauro uses simple multipliers of that number to come up with broad rule-of-thumb estimated total budgets: multiply that by 2.5 for turnkey costs on modest to intermediate finishings, and triple it for high-end finishings. For a place like Goodwin’s, which Mauro calls “a modest chalet, you’re looking at the high-$200s per square foot, but our benchmark for a turnkey place is $300/square foot all in, for a nicely accented home.”

For Goodwin, the construction landscape had changed a lot in 20 years. “The costs… were going up as we were building,” Goodwin says. “A lot of the guys we had helping us with the build were blown away at how much more everything was costing, even in the last year. That made it more difficult to stay within our targets because someone would estimate $10,000 and it would be $12,000.”

COST CATEGORIES FOR YOUR CUSTOM HOME

While setting the budget for your home is up to you (and perhaps your lender!), getting a sense of what things will cost is the best way to set a realistic budget from the start. Custom home costs can range from roughly $200 to $400 per square foot, depending on variables such as your location, the condition of your lot and your personal aesthetic and style. “Probably the biggest costs would be the interior,” says Neil Moody, CEO of the CHABC. “You can burn up a lot of budget in the kitchen and bathrooms.”

To start figuring our costs, Brian Charlton of JB Charlton Homes in Cranbrook, B.C., suggests looking at homes that are similar to the one you want. “It’s really hard to use a square footage cost given all the variables. Our best bet is comparables,” he says. “We ask our clients. ‘Do you see anything in our portfolio that is what you’re thinking?’ Now we’re talking apples to apples.”

Moody adds that you’ll want to ask your builder about hidden costs, too, such as change orders. “Ask what happens when you’re part-way through the house and you don’t like something. How will they handle change orders? That has to be reflected in your budget immediately, because it could affect financing.”

Here’s a sample cost estimate to build a 1,000-square-foot log cabin similar to Rhiannon Goodwin’s (bungalow style, no basement). Cost per square foot for this cabin was $185.95. Danny Mauro of Discovery Dream Homes West suggests adding an additional $15 to $30 per square foot for a crawlspace or full basement.

In your budget, be sure to also include costs for land purchase, designs/plans if you’re building custom, tool rentals, barging costs if necessary, shipping, insurance, interior design, landscaping and extra time for travel if ferrying workers is required.

Below is a sample for building cost estimates, which can vary dramatically.

STICKING TO THE BUDGET

Part of the reason Goodwin found herself over-budget was due to issues with her lot, including excavation problems and an unexpected septic system rebuild. While she had hoped to do the bulk of the work herself, she ended up having to get quotes for work she hadn’t been planning to do at all–like building a new septic field.

For first-time custom home builders, the key in sticking to the budget is knowing what to plan for (including the unexpected), and what factors will affect costs, such as location. “Costs are higher on the Island versus the Fraser Valley because of the ferries,’ says Neil Moody, CEO of the Canadian Homebuilders Association of B.C. (CHABC).

Separate your costs into phases of building so you can organize your estimates: first the site, then the foundation and framing, exterior finishes, interior systems and finishes, and finally, the landscaping. Factor in all permits and fees, shipping and labour costs, plus demolition and site-prep costs if there are existing structures or improvements on your lot.

“There are costs associated with each phase that depend on the site and the plans,” says Moody. “For example, are you choosing a site on a hill that will require reinforcement and excavation work, or on a flat lot that might have less preparation costs? Are there services available from the municipality? Is there blasting involved?”

For Goodwin, site work ended up taking up a bigger portion of her budget than she anticipated. “We found a piece of Vancouver Island bedrock when we were excavating for our spot,” she says. “Everywhere we wanted to put the house had a chunk of Vancouver Island in it. But we brought it up to level and ended up with a crawlspace because of it.”

It wasn’t the only unexpected cost she encountered. “Our electrician doubled the quote on us,” she says. “And our well blew. We had a great well for the original house. But when we were watering our concrete, the well pump blew. We had to dig up the whole driveway.”

And then there was the wood finish she chose after months of research. “I did a lot of testing of different products on the logs because I knew that was going to be a big area for me, where I’m fussy,” she says, adding that she went with the most expensive finish to get the look she wanted.

While Goodwin had the time and resources to build herself (she took an owner-builder course, inherited tools and know-how from her father and had access to a community willing to help her), many aren’t willing–or able–to take on a custom build themselves. Nor should they, says Brian Charlton, owner of JB Charlton Homes in Cranbrook, B.C. “You can’t start from scratch and know what you need to know about building a house,” he says. “Focus on what you can know, which is finding out which builder is the best fit for you,” he says, adding, “Do your due diligence. Find a builder you can be confident in and trust, and then trust their process.”

And know your budget, he adds. One of the biggest questions Charlton gets is, “How much will is cost per square foot?” And it’s a question he can’t answer–not right away, anyway.

“This is a conversation every builder has, he says. “We break our budget down into a spreadsheet with a couple of hundred lines, and we go through it line by line with the homeowner,” he says, adding that his team puts a solid 40 hours of work into their quotes. “Not all builders take that approach,” he says. “Many are less transparent. We’ve just found the conversations are so much easier to have if it’s as transparent as we can make it. And we end up with good outcomes.”

Charlton says there shouldn’t be any budgetary surprises if your builder has provided a quote based on your budget–except perhaps at the excavation stage. “That’s the only area where you see large variances. The homeowner may have purchased a lot that looks good until they start digging… and then they start digging up garbage, an old car or filled in lot. Or they might find something unforseeable in the geology.”

Which is exactly what happened to Goodwin. But one year and $300,000 later, she moved into her new home and says it was worth all the time and money spent. “Part of the reason I built the new log house is because it’s so beautiful. The new one is super bright, and has a huge, open mezzanine and windows that open into the forest. It’s very unique and the land here is really special.”