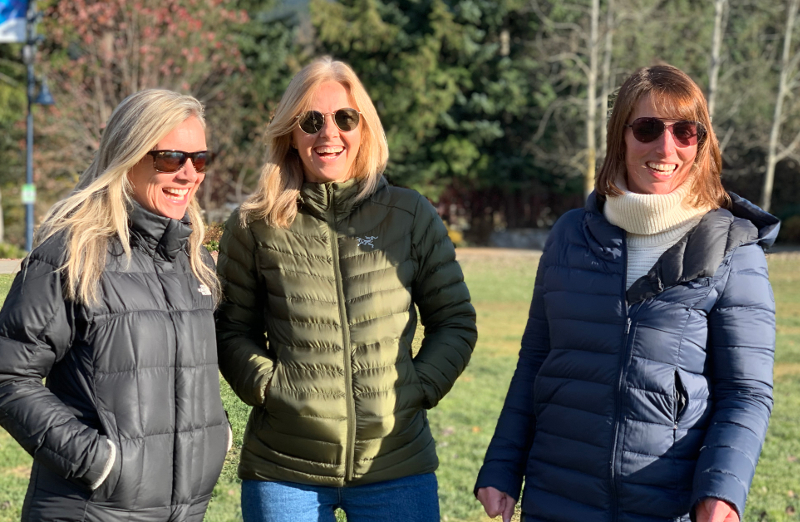 Making new friends can be one of the easiest, and most unexpected, benefits to realize by moving to a smaller community.

Even if the location, finances or work and social ties of your current hometown aren’t enough to keep you there, the fear factor of relocating as an adult holds many people back. Here’s how people at three different life stages overcame their trepidations and made a big move, making a new home in smaller B.C. communities.

In 2017, Gail Pischak, now 66, left behind her Regina hometown and the consulting and training business she’d established there–along with the unforgiving prairie winters. Today she enjoys the more pleasant climate of oceanfront living in her East Beach condo in White Rock. Relocating also gave her proximity to direct flights to the College of the Desert in Palm Springs, where she’s currently enrolled in film school.

A positive outlook and her excitement at new opportunities trumped any fears. “There’s a real quality of life and sense of community in White Rock, which I was looking for,” Pischak says. She joined a gym for both fitness and friendships, but admits her strongest social connections came from her neighbours. “They introduced me to the local cafe, the farmers market, art fairs and festivals and even helped me find a doctor. We go for coffee, happy hours and vacations together, too,” she says. “It’s such a new experience: It almost feels like family, except it’s community.”

Gail is looking forward to the day she starts her own production company and starts making short documentaries from White Rock. She adds, “I probably wouldn’t be doing it, had I not moved.”

After being forced to bounce from one run-down or poorly managed Vancouver rental apartment to another, and facing vacancy rates of less than one per cent, couple Mandy Renneberg, 38, and Ryan Stinson, 36, faced a constant challenge to find suitable, pet-friendly spaces to live.

Looking for an affordable path to homeownership, less rain and more sun, plus a sustainable work-life balance, Renneberg took to Twitter to connect with fellow tech workers, including a former colleague living in Victoria. “We asked a lot of questions about the tech industry, life and community in Victoria,” says Renneberg.

During an exploratory holiday in the capital, Renneberg and Stinson fell in love with historic Victoria West (Vic West to locals). “We’ve been able to save, buy a townhouse, bootstrap a design agency [SOHTOH.com] and live in more space,” says Renneberg, who explains that spending more time outdoors helped distract the couple from missing their tight-knit circle of Vancouver friends. “We quickly met like-minded people through two tech-focused social network groups, and soon after us, some Vancouver friends relocated, too.”

With a home close to the ocean and a small forest nearby, they savour the peacefulness and live with a smaller carbon footprint. “We rarely use our car here, and Victoria’s bike lanes provide a safe commute. We’ve even forgotten the big-city noise,” says Renneberg.

For more than 10 years, Kelly and Geoff Parry vacationed in the Okanagan, mostly around Vernon. They frequently talked about relocating to escape the hurried pace of living in suburban Coquitlam. In 2015, with a job layoff looming for Kelly, who is now 55 (Geoff, who is now 65, had already eased into retirement a couple of years earlier), their frustrations overcame their fears of moving to a new town. They were fed up with squandering their money on their suburban rental home and discouraged with Metro Vancouver’s lack of affordable housing for purchase.

Returning to a community where they’d so happily vacationed many times before, they relocated to the Township of Spallumcheen, five kilometres from Armstrong and 17 kilometres from Vernon. They bought a house on a half-acre of land in the heart of farm country. “We’re living debt free and can easily sustain this new lifestyle,” Kelly says happily.

It took some time to adjust to their new rural lifestyle and make friends, she admits, but they used their interests to assimilate into the community. “In Coquitlam, we volunteered for an organization providing therapeutic horseback riding for people with disabilities, so we signed up to help out at the North Okanagan Therapeutic Riding Association. It’s been a nice connection and we’ve met lots of great people,” Kelly says.