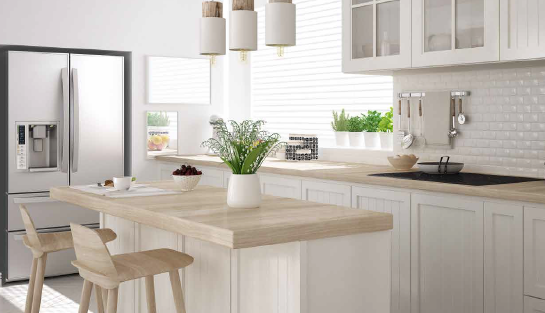 Whether you favour a Japanese-influenced Marie Kondo purge or an artfully Swedish cleanse, downsizing your belongings can give you a fresh outlook on life.

Throwing up freestanding shelves in a bathtub to accommodate yet more stuff – albeit hidden behind a shower curtain – felt like the last straw. My octogenarian mom was already guilty at the time of struggling to throw away anything, even to the extreme point of collecting stacks of flimsy wooden baskets each time she bought focaccia from her local store (“They might be useful for the grandchildren”) and hoarding empty jam jars (sure, she makes marmalade, but not that much).

Threatening to turn the bathroom into a makeshift storage locker a few years ago was a lightbulb moment. She was freighted with stuff: it was slowing her down, taking up her time and most importantly making her anxious. With uncharacteristic brio, she put her four-bedroom single-family home on the market just before that Christmas and went shopping for a two-bedroom condo to free herself from a lifetime of bargain hunting, four children’s furniture and an attic full of dead-relative gear dumped on her and my late father over the decades.

Beyond recycling those bread containers and jars and the forced mathematics of sieving 2,000 square feet into a right-sized 700, the shedding happily continues today. Through an innate, and undoubtedly liberating dostadning (the wonderful Swedish hybrid word meaning death and cleaning and the inspiration behind the book, The Gentle Art of Swedish Death Cleaning: How to Free Yourself and Your Family from a Lifetime of Clutter), she now makes constant lists and calls to action. Who is best suited to receive a few bits of heirloom furniture and china? Check. Who in the family might want some jewellery right now, pieces outside the trinkets she needs in her more limited social whirl? Check. Which local charity store will be happy for the leftovers after a quick sort out of towels and bed linens she really wants? Check…

The positive lightening of her load and taking responsibility for life, while she’s on earth and after she’s gone, has meant freedom: more time to use the local cinema like it was her TV, play bridge, practice her yoga and tai chi and to go to arts-appreciation talks. Most importantly, she is generally less stressed about having “stuff” all around her and has fewer worries about what we may all say once she’s gone (“Just how many scarves/sweaters/glasses/ rings does one need?”).

And it’s certainly rubbing off on me. No matter what your age, feeling like you’ve brought some order to the stuff invariably collected over time, and jettisoned it off to new homes or people, makes us feel like less of a burden. It’s been a good reminder of the chuckout- three-things-a-day rule and turning to a Marie Kondo-esque style of tidying up. The bestselling Japanese author of the Kon- Mari method encourages people to focus on what to keep rather than what to chuck, based on whether it “sparks joy” in your life.

Just be warned: once you start clearing, you’ll soon be joyously proselytizing that can’t-take-it-with-you philosophy to anyone willing to listen.