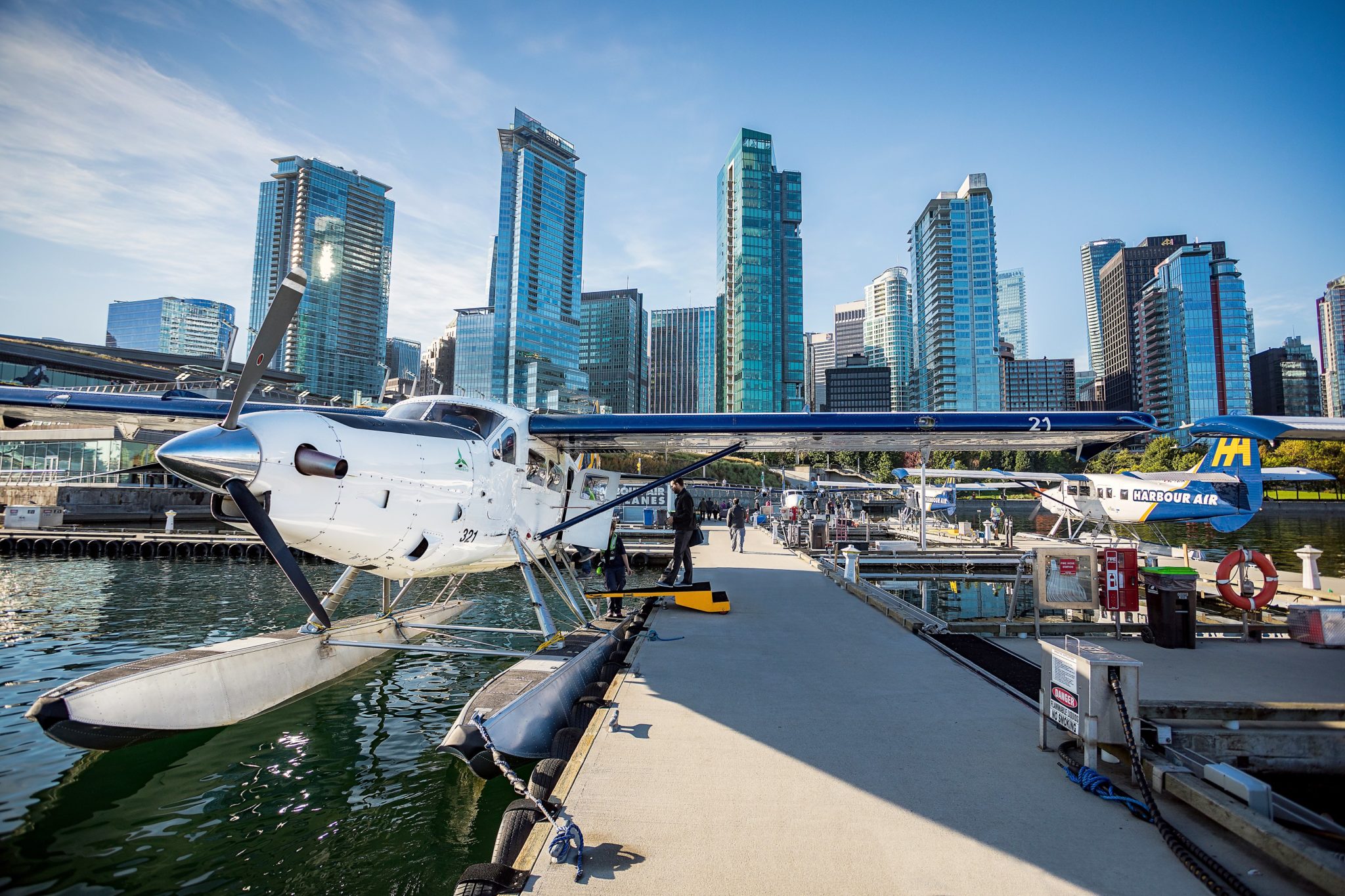 Chris Gray spent decades watching the neighbourhood he loved— North Vancouver—get busier as traffic throughout the Lower Mainland grew increasingly worse. Tired of spending so much daily time stuck in his car, he made the move to Vancouver Island’s Mill Bay last year.

Now his commute is different. Gray, owner of Perimeter Drainage and Mini Bins, travels to Vancouver for business about once a week via floatplane. Rather than stare at the bumper of the car in front of him while getting to and from work, he gazes over the Strait of Georgia from 3,000 metres above as the North Shore mountains and the Lions Gate Bridge come into view before the plane touches down in Burrard Inlet.

“It’s a lifestyle change,” Gray says. “Some days [on the mainland] I would spend five hours in my car. Now I have a half-hour commute.”

A regular with Harbour Air Seaplanes (which also owns SaltSpring Air and Whistler Air), Gray is able to board the small DHC-2 Beaver aircraft in Maple Bay, which is a short drive from his home. At the terminal, he grabs a free newspaper, coffee and a pastry, and will often catch up on administrative work and e-mails on his laptop. He’s in downtown Vancouver faster than the amount of time it would have taken him to drive to the Nanaimo ferry terminal.

“I can jump on a plane and I maximize my time,” he adds. “Sometimes I’ll get to the terminal early because it’s such a great atmosphere; it’s a great place to work. It’s just a fantastic commute.”

With recreational property at Lake Cowichan, Steve Lee is a North Shore resident who commutes from spring to late fall. He travels from Maple Bay to downtown Vancouver every week for work and is able to have full weekends at his waterfront cabin.

“On Mondays, the plane leaves at 7:30 a.m. and I’m at work by 8:15,” says Lee, whose office is in Vancouver’s financial district. “It makes being on the Island so easy. The only thing that could make it better would be if the planes landed on Cowichan Lake.”

Anyone who has a body of water between them and Metro Vancouver— and who must travel regularly or even occasionally for work— knows the options: floatplane, helicopter or ferry. For many, a short flight is preferable to a ferry ride that may involve waiting in line and also carry the risk of missing a sailing.

There are advantages to travelling with the ferry service, of course; most notably, it’s less expensive than flying. Gray, however, manages to make the journey as economical as possible, because he typically flies standby—and uses Harbour Air’s Turbo Tickets—or travels mid-day, when fares are cheaper. Regular commuters find that the amount of time they save from travelling by air more than makes up for the increased travel expenses. If you’re travelling solo on some flights at certain times of the year, the ticket cost isn’t that much more than that of a car and driver on B.C. Ferries.

Donna O’Connor flies from Salt Spring Island to Vancouver about once a month for work. She says travelling by seaplane rather than by ferry allows her to accomplish more in a day.

“It’s more efficient time-wise,” she says, adding that she’s always on the lookout for seat sales. “I save about three hours’ commute time. I love the time savings and it’s fun to feel like a jet-setter.”

There are downsides to flying, aside from the cost. Luggage restrictions, for one: smaller aircraft generally don’t permit carry-on bags (purses or briefcases need to be stored in the back). And on occasion due to cargo loads, seaplane passengers may have their luggage on another flight. However, passengers are able in advance to arrange to transport everything from pets to bikes.

Then there are delays or cancellations due to the weather. Ferries can face similar challenges but are typically more reliable when storms or snow threaten.

• Seair Seaplanes is on the Fraser River at the Vancouver International Seaplane Base, near the south terminal of the Vancouver International Airport. It offers daily flights from this location to Nanaimo and six Gulf Islands, including Pender and Galiano. It also flies from downtown Vancouver to Nanaimo with up to 12 scheduled flights a day. Its flagship craft are Cessna 208 Caravans, single-engine turboprop planes that are the fastest seaplanes in Canada. With de Havilland Turbine Beavers, de Havilland Beavers, and Cessna 185s, the company can accommodate groups of up to 76 passengers.

• Helijet launched Canada’s first scheduled helicopter service in 1986 and the company flies regularly from Vancouver Harbour and the Vancouver International Airport to Victoria and Nanaimo, with additional operations in Prince Rupert and Haida Gwaii. Free parking is available at its terminals, and kids aged 12 and under fly free with a paid adult.

Prices vary by month, day of the week and time of day but a oneway flight from downtown Vancouver to Nanaimo for one adult is approximately $109 with Seair; $108 with Harbour Air; and $129 with Helijet. All three offer various discounts and last-minute or web fares. At press time, the fare for a car travelling to Nanaimo from Horseshoe Bay on B.C. Ferries was $57.50, with the driver cost adding $17.20 for a total of $74.70. –Gail Johnson

Moving to a smaller community often means that you want to get back to the Lower Mainland, or head to smaller cities to see friends and families. Larger centres in B.C. can accommodate multiple daily flights, as depicted in the map.

Please refer to the airlines directly as flight schedules are subject to change. Flights are with main carriers unless otherwise specified.

ABBOTSFORD TO
Calgary, twice weekly.
Check the airline as the schedule changes

Fernie has no airport but offers charter service from Cranbrook airport.

Valemount’s airstrip can only accommodate small jets and heli transfers.