We did some research, crunched some numbers and weighed it out for you. Numbers don’t lie: lower home prices in outlying communities make commuting into Vancouver worth every penny.

Twenty-four minutes and 8.7 kilometres. According to the latest Statistics Canada numbers, from 2016, that’s the average Canadian’s commute to work by car. But 7 per cent of Canadian commuters, from communities such as the Abbotsford-Mission area, reported spending more than an hour covering long distances. By train or subway the average commute is 49 minutes; by bus, around 42.

These numbers won’t surprise anyone who has commuted throughout the Lower Mainland. For most, getting to and from Vancouver in roughly an hour or less each way makes the commute palatable. Check out the results of our findings here, captured at a glance in this charts and graphics, to see how commuting still pays off in significantly lower home prices.

If you commit to the commute, here are some additional tips to help.

Early birds: Rush hours here are long, generally considered to last from 7:00 a.m. to 9:30 a.m. heading west, and 4:00 p.m. to 7:00 p.m. eastbound–smart commuters avoid those hours whenever possible. Outside of rush hours you may be able to reduce your commuting time by almost 50 per cent.

Priority Lane: If you’re driving with another person in your vehicle, then using the High Occupancy Vehicle (HOV, marked with black and white diamond-symbol signs) lanes are a given–and if you drive an electric vehicle, remember you can use that lane even when driving solo!

Express Service: For TransLink and other BC Transit takers, express buses are a smart option, with fewer stops than regular routes. Rail service like Skytrain or the Canada Line are even faster, and not at the mercy of vehicle traffic on the roads at any given time. The West Coast Express commuter train is a fast option that operates Monday to Friday during peak hours from Mission to downtown Vancouver, stopping in several key areas along the way.

Sharing Economy: Organized ride-shares make sense too, whether used point-to-point or to access a transit hub: Poparide, gobyRIDE or U-Pool are affordable at five to 10 dollars per seat one way on average. Companies, organizations and larger groups can use Liftango or RideShark platforms to create organized carpools. Bonus: if your carpool program is registered and recognized with TransLink, you can take advantage of Park & Ride Carpool programs at transit hubs like Langley and Surrey locations, where carpool vehicles containing at least two people can access priority spaces to park in the lots (first-come, first-served), then hop on a Skytrain or bus.

Outside of rush hours you may be able to reduce your commuting time by almost 50 per cent. 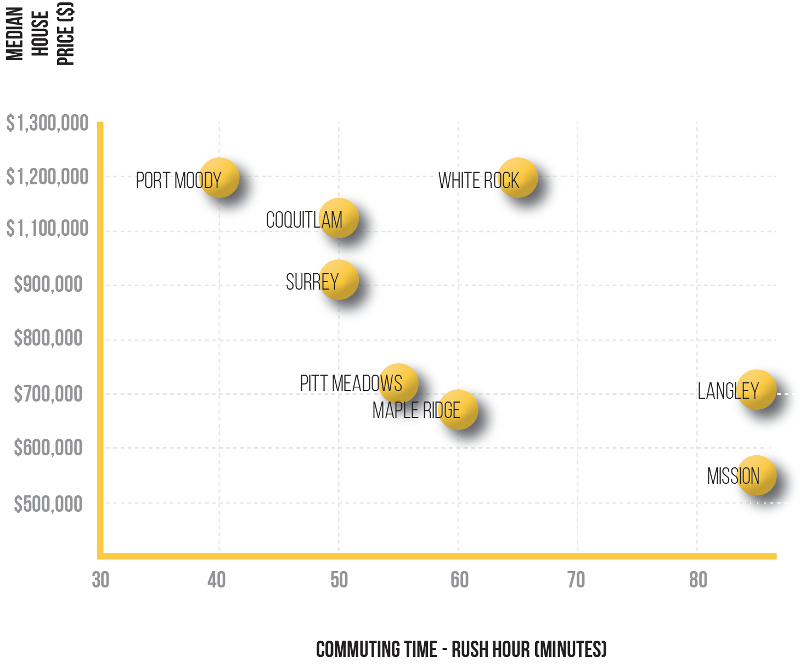