If you’re considering going south for a primary or vacation home, both the desert and the coast make worthy investments. Here’s a look at two popular sun destinations–one long established, and the other still flying under the radar.

For Western Canadian snowbirds, the attraction to Southern California and Mexico’s Pacific Coast stretches back decades. For California, Palm Springs developed an aura of glam in the 1950s and ’60s, when Hollywood stars such as Frank Sinatra, Marlene Dietrich and Bob Hope established second homes in the desert. For Mexico, it was the release of Tennessee Williams’ The Night of the Iguana in 1964, starring Elizabeth Taylor and Richard Burton, that spurred international interest and development in Puerto Vallarta and the Pacific coast.

PALM SPRINGS: QUEEN OF THE DESERT

WHY Palm Springs and its (almost) guaranteed 350 annual days of sunshine are just a hop or a jump from most Western Canadian cities–and for many snowbirds, proximity remains the number-one draw. There are direct flights to Palm Springs International Airport from Vancouver, Calgary, Edmonton, Winnipeg and Toronto; on a good traffic day, the drive from Los Angeles (and more extensive flight connections at LAX) is only two hours.

But climate is just one of the reasons why snowbirds like Palm Springs offer so much. For avid golfers, there are more than 120 courses in the region. For those whose tastes run more hedonistic, the city has a growing list of award-winning restaurants and trendy retailers.

WHAT Housing that’s hot in the desert market covers a wide range of styles and vintages. “We still see a high demand for classic mid-century real estate, as well as new construction that includes elements and features of mid-century architecture,” Sandahl says. He notes that buyers typically want open floor plans and seamless indoor/outdoor living.

HOW MUCH According to May 2019 data released by the Palm Springs Regional Association of Realtors, La Quinta (40 kilometres southeast of Palm Springs) has seen the biggest year-over-year increase across the desert communities in detached home prices (up 13 per cent since 2018) while Palm Desert and Rancho Mirage have seen small decreases (of about 3 per cent and 4 per cent, respectively). The most expensive community remains Indian Wells (about 25 kilometres southeast of Palm Springs), with average home prices topping $1.1 million (USD), while in Palm Springs itself, average prices remained steady around $672,000 (USD).

BOTTOM LINE Palm Springs is a prime market for Canadian snowbird investors. Sandahl notes that the trend of buyers renting out their properties continues to rise, despite a new short-term rental ordinance in the City of Palm Springs: “We recently sold an iconic mid-century home for $774,900 (USD) that was grossing $60,000 (USD) a year in short-term rental income.” 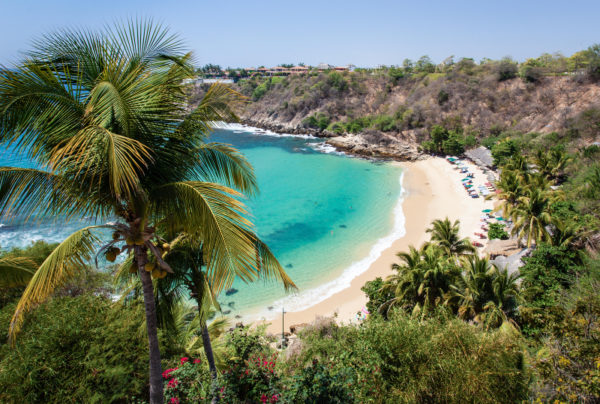 WHY Desert living isn’t for everyone, of course: some want less extreme heat in the summer, and a bit more warmth on winter nights. For these snowbirds, the former surfer hideaway of Puerto Escondido is primed to give Puerta Vallarta and Cabo San Lucas a run for their money.

Puerto Escondido’s Playa Zicatela is widely considered one of the top 10 surfing beaches in the world. A nearby freshwater lagoon is ideal for paddleboarding, while deep-sea fishing, snorkeling, horseback riding and trips to the nearby mountains (for tours of one of Oaxaca’s famed coffee plantations) are also popular. And the world-renowned Oaxacan cuisine is in abundance in small towns and villages.

WHERE Ten years ago, Calgary developer Vivo Resorts started marketing high-end condominium units and villas along the shores of Puerto Escondido, 1,300 kilometres down the coast from Puerta Vallarta in the state of Oaxaca. While Puerto Escondido is quickly growing in popularity (prices are up 40 to 90 per cent over the past decade in one development), there are no direct flights yet, although Huatulco (100 kilometres down the Oaxacan coast) has direct seasonal charter flights from various Canadian cities.

WHAT Since 2009, Vivo has built 135 condo units and 14 villas in Puerto Escondido, with over 50 more sold and ready for construction. According to marketing manager Nic Grey, the resort and surrounding community of 50,000 people appeals to those “who are adventurous and have an active mindset.” Many Vivo residents (most who range in age from their late 40s to mid 60s) end up staying for four to six months each year.

HOW MUCH The plan at Vivo is to complete 400 condos and some 100 villas; 10 years after it started building there, Vivo is still one of the few international developers or hoteliers in the area. “It’s kind of where Puerto Vallarta or Cabo would have been 20 years ago,” says Grey of Puerto Escondido. “It’s offering many of the same things, but at a lower price.” A two-bedroom, two-bathroom. 1,400-square-foot oceanfront condo in Puerto Vallarta could be $599,000 (USD); in Cabo, a similar-sized condo with only peek-a-boo water views sells for $575,000 (USD). At Vivo, a comparable oceanfront condo is selling for $466,000 (USD).

BOTTOM LINE Infrastructure is starting to catch up with burgeoning tourist demand, Grey says–and he expects property values to really take off once that’s happened. “The government is working on a road between Oaxaca City and Puerto Escondido, a stretch of highway that winds through the mountains and takes maybe six to eight hours driving,” Grey says. “When they twin it, it will cut that down to two or three hours–and open up a whole new market.”

Ultimately, in picking the perfect sun investment, it comes down to personal preferences. In the depths of Western Canadian January, the answer is that you really can’t go wrong with either.