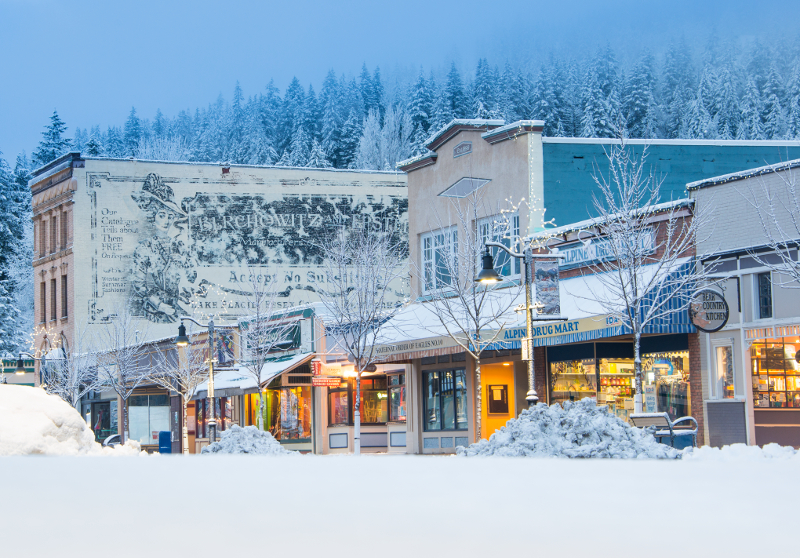 Nestled high in the Monashees, right next to the U.S. border, and roughly halfway between Vancouver and Calgary, Rossland feels like its own little (and still affordable) Kootenay kingdom.

“At Christmas time in 1996, I arrived as a tourist,” says Rossland’s current mayor, Kathy Moore. “By Christmas 1997, I bought a lot and was planning my permanent move here.” Mayor Moore relocated from California more than two decades ago, spending six years since as a local councilor and now almost as long in the mayor’s chair. “We fell in love with the character of the people and the town: it’s just so beautiful here,” she says, of giving up the Golden State for the B.C. interior.

Like so many interior towns, Rossland was carved out of the mountains by miners over a century ago. In the 1890s, there was a wave of prospectors looking for gold. They turned the rugged bush more than 1,000 metres above the valley floor into one of the largest cities in Western Canada at the time, although the gold boom didn’t last.

The miners soon moved off to find their fortunes in the Yukon and Alaska but they left behind a historic gem of a community, one with dozens of elegant, vintage homes and commercial buildings peppered around the hilly town. Both the brick Rossland Courthouse and gabled Miners Union Hall are National Historic Sites, with families and businesses occupying other lovely heritage buildings all over town.

RED Mountain, the local ski hill fabled for deep winter powder, is also one of the oldest in North America and has had a huge infusion of new capital (for two high-speed lifts and an upscale boutique hotel, The Josie, at the base) into what’s often celebrated as one of Western Canada’s last authentically unspoiled ski resorts. It’s also where Olympic gold medallists Karrin Lee-Gartner and Nancy Green Raine learned to ski, and was named Mountain Bike Capital of Canada in 1993, with the world-famous Seven Summits trail as its crown jewel.

“Rossland has the same feel Squamish had when people first started moving there,” says local real estate agent Mary Amantea. Amantea’s mother and grandmother were both raised in Rossland and she says it still has the small-town feel the family remembers.

These days, more people are discovering her little slice of Kootenay heaven. There are just 2,100 homes and buildings in total in Rossland, with a broad, historic main street through the centre of town that only gets truly congested during the raucous winter carnival.

“The market is definitely hot,” says realtor Amantea. “I’ve noticed in the past year or so, higher-end houses have sold where they may have sat previously.” Amantea says a typical three bedroom home can still be found for under $400,000 and condos at the base of Red Mountain are in roughly the same range–not bad, for your own piece of a largely undiscovered mountain kingdom.