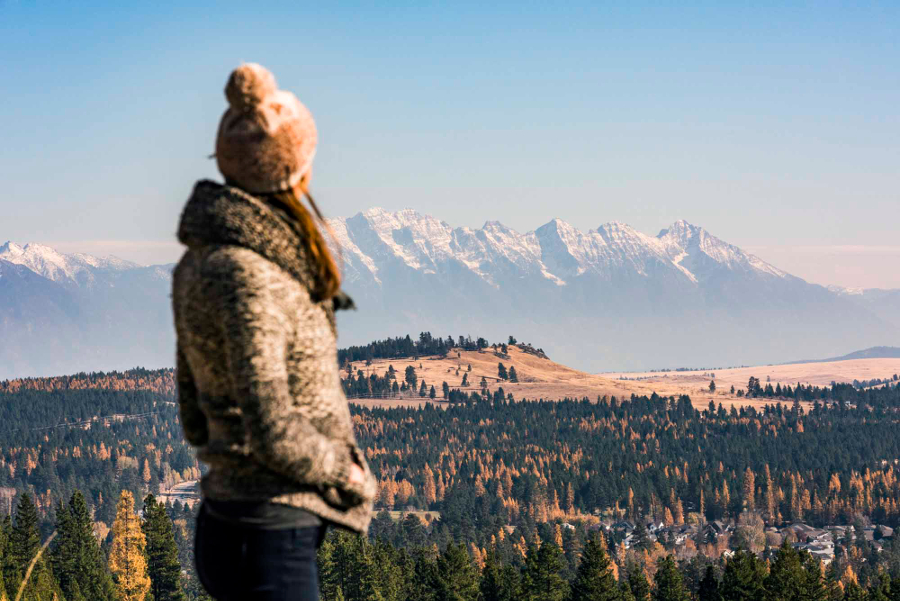 View of The Steeples and the Rocky Mountain trench from Sunflower Hill outside of KImberley, B.C. Photo: Destination BC/Kari Medig

Adaptable as ever, the sun still shines on this Kootenay mountain town in the post-mining era.

It was supposed to be the end of Kimberley, B.C. The mountain jewel, tucked in the Purcells with views across to the Canadian Rockies, was about to be left behind.

In 2001, a Scottish band piped out the final shift from the “Sully”–the local nickname for the Sullivan Mine, the world’s largest underground lead-zinc mine–which gave Kimberley a reason to exist. Everyone expected Kimberley, a town so intrinsically built around mining it was named in 1896 after a famous diamond mine in South Africa, to roll up the sidewalks at the same time.

Don McCormick and his wife Bev were just beginning to build a new house at the time. “We had a lot of people that suggested we were investing in a community that was essentially going to be a ghost town,” he chuckles now.

After floundering for a while at the beginning of this decade, Kimberley re-tooled to become one of the hottest destinations in southern B.C., both for tourists and new residents alike. The little ski hill above town was sold to private operators and was built into the truly international year-round Kimberley Alpine Resort, with an award-winning 18-hole golf course attached to it. World-class skiing, snowboarding, snowmobiling, fishing, whitewater rafting and kayaking are at the doorstep, and 1,977-acre Kimberley Nature Park, the largest incorporated urban nature park in Canada is groomed for cross-country skiing in winter and ideal for hiking and biking in the summer.

Don McCormick’s housing gamble eventually paid off–as did his personal investment in the town, when he became mayor six years ago. “We are now one of the small communities in B.C. that has become a real magnet for people who want a high quality of life, but want access through the airport and internet to the outside world,” says McCormick, who calls the 8,000-person town’s gigabit connectivity “almost unheard of.”

McCormick says about a quarter of Kimberley’s residents are seniors, but the fastest-growing demographic is young families, flocking in mostly from Alberta, the Lower Mainland and other Kootenay towns. “All four schools we have are full, and the demand for housing is outstripping the supply we have,” says McCormick.

Real estate agent Joanne Kitt says she’s never seen the market like it is today in Kimberley. She says the pandemic has resulted in buyers looking for more affordable living space in smaller communities, and this one fits the bill.

Everything Kitt lists is selling, from quarter-million-dollar old miners’ homes that need some love to new builds that can sell for twice that much. “It’s crazy,” says Kitt. “I’ve never seen the number of people coming from the Lower Mainland in these numbers; there are a lot of families moving back.”

And the old Sullivan Mine? It’s now known as SunMine, B.C’s largest solar energy project–proving that the sun still shines on this adaptable little gem of a town.