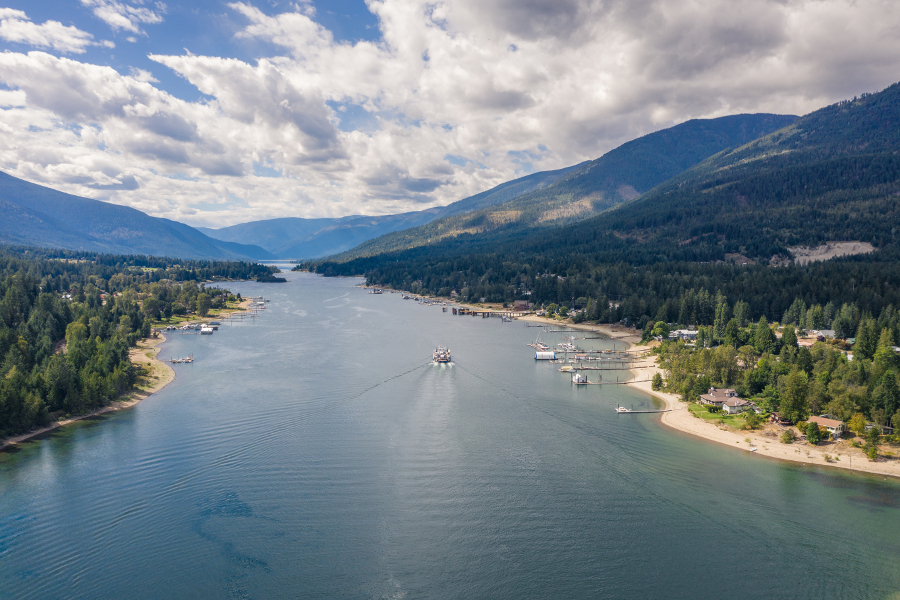 The B.C. small town of your dreams has a “ferry-tale” history.

Every year, a half million visitors are unloaded at Robin Goldsbury’s doorstep. Goldsbury has to entice them in with cold beer, hot food and a bed if they decide to stay a while in Balfour. “We get people delivered to our door; the rest is up to us.”

Goldsbury runs the Dock ‘n’ Duck Pub, Grill & Lodge, the longest-running business at the Balfour ferry terminal, the heart of the community. It was built 74 years ago to service customers getting off the Kootenay Lake Ferry, which crosses from Balfour to the Crawford Bay area, north of Creston. Local lore maintains that it’s the longest-running free ferry ride in the world, and so far no one has stepped up to challenge that assertion.

Balfour is a spectacular unincorporated community that winds along Kootenay Lake, dotted with white sand beaches, historic old cottages and stunning new builds. “What I think keeps people or brings people here is it’s just the right mix of a farming community, a retirement community, a tourist destination and a bedroom community of Nelson,” says Josh Smienk, whose family has lived in Balfour for decades.

Balfour was founded by Charles Busk, a wealthy Englishman who moved to Canada in 1888 and claimed 200 acres, laid out a town and named it after Lord Balfour of Britain. He intended it to be the centre of the West Kootenay, which never quite happened, but it has become a thriving bedroom community of Nelson. Less than a thousand people call Balfour home in the off season and it balloons to at least twice that in summer.

Just down the highway from the ferry terminal is Kokanee Creek Provincial Park, with three campsites ringed by beaches, playgrounds and nature trails. High in the mountains above is the magnificent Kokanee Glacier Park, one of the most scenic provincial parks in B.C. Balfour is also home to an 18-hole championship golf course (and the course-adjacent Queens Bay Resort residential community) and 20 minutes away from a dip in Ainsworth Hot Springs.

A new ferry is being built in Nelson for the Balfour run, and millions more will be invested in the terminal itself. Will the new ferry fundamentally change the nature of Balfour? No, says Dock ‘n’ Duck’s Goldsbury. “Many people come to take the ferry” currently, she agrees, “but what is wonderful about Balfour is we have everything you need here.”

Longtime resident Smienk, who served as a Regional District director for 25 years, agrees: “It’s a beautiful rural setting, you are close to recreation and close to the lake … it’s just peaceful and quiet, and there is a feeling of community here.”