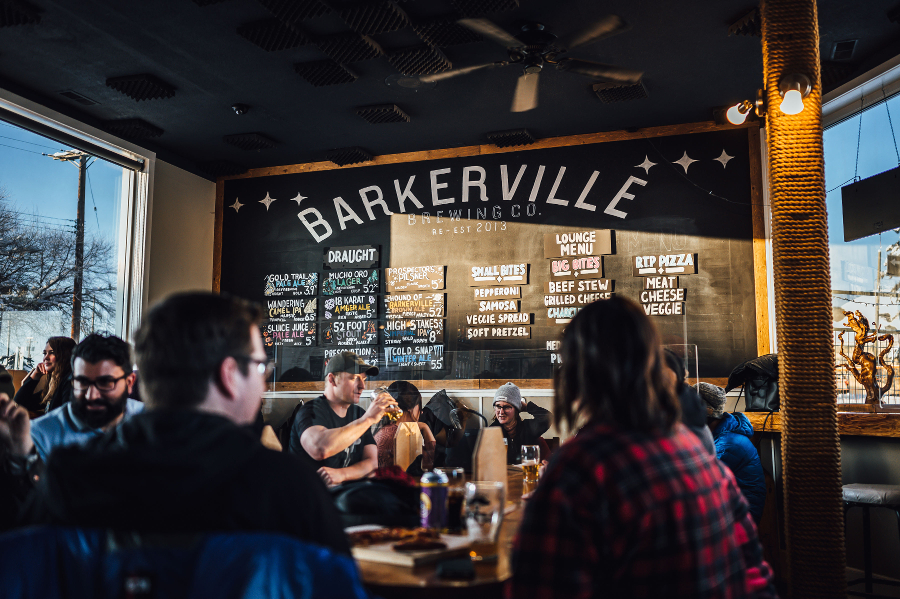 Whether you’re into hiking, biking, horseback riding, or skiing, B.C. is home to all sorts of spectacular trails–but the BC Ale Trail leads to discoveries that target your tastebuds.

With more than 200 craft breweries throughout the province, 20 routes on the BC Ale Trail provide a way for beer lovers to plot out hops and stops. The online guide (bcaletrail.ca, plus apps for Android and iOS) features five regions covering every corner of the provincial map, with many breweries offering top-notch food along with their brews. Here’s a handful to satisfy your thirst, and your appetite; watch the BC Ale Trail’s social media channels for seasonal releases and more.

This Gold Rush-themed brewery sits on the historic Cariboo Gold Rush Trail at the confluence of the Quesnel and Fraser rivers. Local ingredients star on the beer and food menus, with many brews having names rooted in local lore. Hurdy Gurdy Hibiscus Pale Ale has a pretty, pink hue with grapefruit and strawberry flavours; Hound of Barkerville Brown Ale, made with Vienna malt, has bright Hallertauer hops and a smooth finish. Grab a seat at the custom Timber Kings table to share a Mediterranean platter with hummus, olives, naan and veggies; or catch the sunset from the patio while enjoying pizza by neighbouring Quesnel Red Tomato Pies or soft pretzels from Quesnel Bakery with beer mustard. goldrushtrail.ca, barkervillebeer.com

Heidi’s Restaurant was a local favourite for years, and when renovations took place nearly a decade ago, an on-site brewery came along, too. The newly named Heid Out eatery is now home to Fisher Peak Brewing Co., which takes its name from the tallest peak in the southern B.C. Rockies. The in-house set-up means that six of the beers make their way straight to the tap from 1,000-litre tanks. Try the crisp, clean Kain Ginger amber beer or creamy Elephant Run IPA with the Heid Out charcuterie board, replete with local Gwinner’s landjaeger sausage, J2 Ranch bison pastrami, rare fair-trade sesame ahi tuna, applewood cheddar and fig jam. Or indulge in a “snack” poutine and spicy pickle sticks. theheidout.ca

Two themes pulse through this place: local love and experimentation by the brewer and chef. The food menu changes twice every day: expect small plates meant for sharing at communal harvest tables, with ingredients like honey from nearby beekeepers, local seafood (including Salt Spring Island mussels), plus produce, cheese, coffee and more from area producers. The team even makes pasta and bread in house. Tuesday Small Batch yields all kinds of playful and inventive brewery releases, such as Pineapple Salsa Blonde, Pink Guava Hefeweizen or Hibiscus Orange Pale Ale, while Beach Blonde Ale and a Ginger Lime Radler are year-round favourites. beachfirebrewing.ca

Bad Tattoo Brewing is known as much for its standout beer as it is for its rock-oven pizzeria. Many of the beers are Mexican inspired, like Los Muertos Cerveza Negra, a clean, crisp medium-dark lager; at the other end of the spectrum is the fruity and hazy Juice Bomb New England IPA. The pizza menu has three categories: Red, Pesto, and Weird (think: Black & Blue, with Penticton’s Upper Bench Creamery Blue Cheese, blackberry compote, roasted local apples and toasted malt). Starters, salads (like Black Garlic Chicken Caesar), kids’ pizzas and desserts round out the menu. Go behind the scenes on a tour of the custom-built brewery to see its 108-ton grain silo and three-vessel brewhouse, or get hands-on through a Brewer for a Day experience. badtattoobrewing.com

Fun, accessible beer and sense of community are on offer at this Sunshine Coast destination, with a great outdoor terrace packed with games and cozy seating areas. We love the One Sailing Wait, a citrus-forward IPA with hints of pineapple, grapefruit, and lemon peel; Hwy 102 is an Oatmeal Stout with flavours of coffee and chocolate. Big burgers to go with those brews include the signature BeerBQ Beach Burger, with BeerBQ sauce served on a brioche bun (and Beyond Meat patties available as an alternative to fresh-ground chuck). Beer-battered fish and chips and various stuffed bao (chicken, pork belly or breaded-and-fried avocado buns) are other options. Or go straight for the S’mores Funnel Cake with toasted marshmallow! gibsonstapworks.com