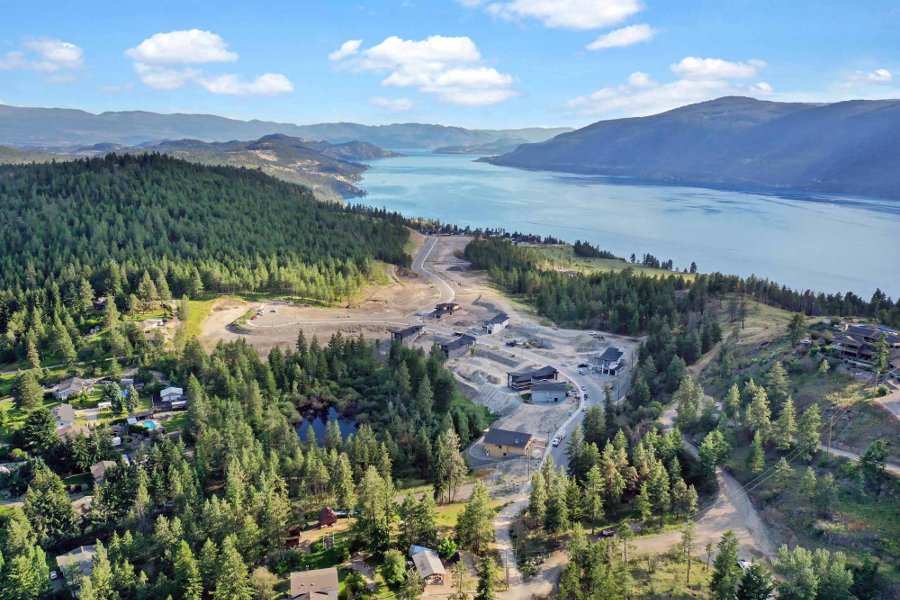 While an empty lot may initially seem to lack curb appeal, it can actually be an optimal starting point for building the home of your dreams. Here are some of the perks of building a home on an empty lot in your chosen B.C. town or small city.

To a certain breed of aspiring homebuyer, no sight is as thrilling to the eye as an undeveloped patch of dirt, as ripe with possibility as a blank canvas to a painter. An empty lot, on previously undeveloped land, is where a homebuyer arrives when “you want to build exactly what you want,” says Danny Mauro, a sales and design consultant for Discovery Dream Homes West.

Karin Eger-Blenk, director of Blenk Development Corp. and marketing manager of Wilden Real Estate, says building a custom home has “always been popular. If you have the financial flexibility to create your home just as you envision it, completely adjusted to your needs, to your budget–of course, with the help of a home designer and your builder–it’s always the number one choice.”

As the cost of Lower Mainland real estate continues to rise, and recent global events entice longtime city dwellers to seek out more spacious surroundings, custom home-building in B.C.’s smaller communities is experiencing a surge in interest. While the cost of such a project can vary widely–based on factors like location, views, and proximity to waterfronts and city-based employment–a reasonable budget can net you a true dream home, with coveted features like a home office, outdoor living, plus more indoor entertaining and kids’ play space.

If you’ve been contemplating following the trend, here are some important points to consider.

Although custom homes are a key part of his trade, Mauro admits that building from scratch is “not for the faint of heart.” For one thing, provincial building regulations demand diligence (and the guidance of a professional to navigate. B.C.’s gorgeous landscapes are “arguably some of the most difficult places to build a house in Canada–if not North America,” because of seismic issues, flooding and fire considerations, Mauro says. “If you have a sloping lot that has potential for water, rock or soil issues, you likely have to get [a geotechnical engineer] involved, and that’s $120 to $150 per hour.” Eger-Blenk recalls that when her father, Gerhard Blenk, began buying the Kelowna land that became Wilden’s master-planned communities, he had to learn “the science of building on a hillside.”

Fortunately, B.C. consumers have a wide range of building options to choose from, all of which boast certain advantages. Lots in master-planned communities are already fully serviced and designed to eliminate most construction obstacles, while an unserviced and/or rural lot offers the opportunity to build-in popular (and increasingly economical) off-grid options such as solar power.

Gino Dal Ponte, a Kelowna-based realtor for RE/MAX, points out that building a custom home usually requires patience, during a period of a year or more, which can be rewarded in more ways than one. “Is it worth $150,000 to you to wait a year?” he asks. “When you buy a lot and build a home, you’re not subjected to any large [profit margins] or carrying costs; you’re really buying the home at bare-bones cost. You’re actually buying it at below-fair-market value, because once the home is built and it’s beautifully landscaped and furnished, it’s worth more money,” says Dal Ponte. This is a particular bonus for first-time buyers, who may have less to spend initially, and can accumulate greater equity throughout decades of ownership.

A reputable realtor will help you demystify much of the process and can match you with other professionals. Being sure about your total budget is helpful for all involved. “With that information,” says Dal Ponte, “it’s quickly easy to ascertain whether we should be showing you, say, a $275,000 lot or a $550,000 lot. We’ll usually the client to two or three builders, and ask a series of questions to both the builder and the consumer. If you’ve never built before, you wouldn’t know about timelines and costing and budgeting. The more time we spend upfront, the easier it is for the consumer.”

These days, a “wait and see” approach likely isn’t to your advantage. While properties in B.C.’s smaller communities remain very reasonably priced compared to the Lower Mainland, prices and building costs are consistently rising. Retirees and younger people alike are driving the trend, especially since the pandemic has freed many to work from home, meaning “home” can be just about anywhere.

“People are flooding here in droves, wanting to… move to a quieter, cleaner place,” says Mauro, namechecking “Cumberland, Comox, Courtenay, Campbell River, Nanaimo–five years ago you could buy a lot in the low to mid-$200,000s. Now that same lot is in the $400,000s.” The trend is continuing across the island, as people (“especially younger families with money” says Mauro) cash out of Vancouver for towns with mountain biking at the doorstep, proximity to ski hills and other outdoor recreation.

Like Mauro, Eger-Blenk is fielding an unprecedented number of inquiries, including from as far afield as Ontario and the U.S. “Consumers are aware that the possibility to build your own home close to a bigger city is becoming rare,” she says. Wilden, which is a short drive downtown Kelowna, has sold out of lake-facing lots. “I never could have believed how quickly they went.”

The good news is, those seeking to escape the big city still have the opportunity to substantially upgrade their home and lifestyle, and perhaps even come out ahead financially. “It’s given people the opportunity to sell out of their market, capitalize on a pretty good profit on their home, come here and spend perhaps a half or two-thirds of that, and bank the rest,” says Dal Ponte.

THE COST OF PERFECTION

The custom home of your dreams is a unique creation, its every detail rendered to your exact specifications. Consequently, every one of those details–location, size, finishes, the number and type of contractors you need to employ, and much more–affects how much you can expect to spend.

“There’s no cut-and-dry costing formula,” says Danny Mauro of Discovery Dream Homes West. “For instance, a bungalow has much larger costs for the foundation and roofing versus a two-storey, which doubles the space for the same relative costs. You would be looking at the high $200s per square foot for a modest plan; for higher-end builds, from the low $300s to as high as $500. And a build for the same house in Whistler will cost at least 50 per cent more than a project in Kamloops.”

It may sound obvious, but the first step is to spare no detail when discussing your vision with contractors: most likely they’ve seen and done it all before, and can help keep your project well within budget. “The most important thing is to ask questions,” says Vanessa Graham of RE/MAX Kelowna. “Get comfortable with able to speak freely [with your realtor and contractors], and work with them as a team rather than as separate entities.”