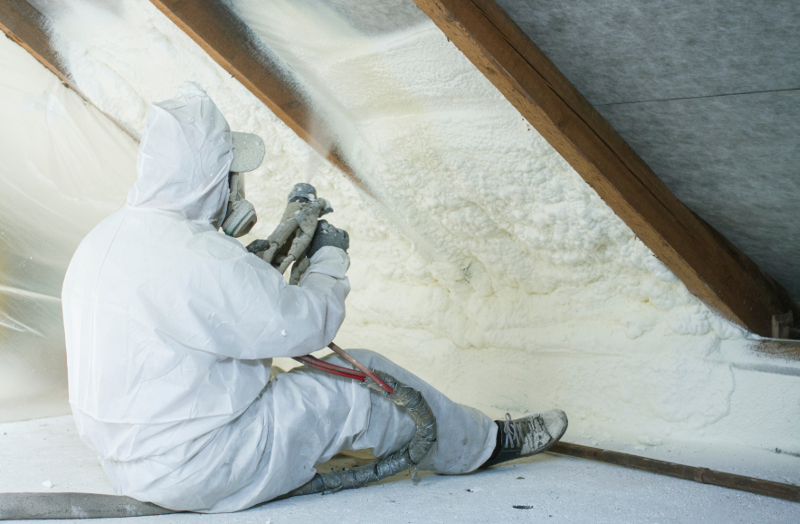 Spray foam ceilings are one of many ways to increase energy efficiences.

B.C. prides itself on beinga national leader in energy efficiency initiatives, and its 2017 BC Energy Code is one of the most ambitious programs to date. Here’s how its helping pave a clear direction for all new buildings to be net-zero energy ready.

B.C. plans to be the first province in Canada to eliminate carbon dioxide from energy sources in homes and buildings by 2032. The province embarked on this path in March 2017, when it implemented the BC Energy Step Code, which changed the way houses would be built, making new homes extremely energy efficient.

“The BC Energy Step Code was introduced by the provincial government to create a graduated process that is performance based rather than prescriptive,” says Ron Rapp, CEO of the Home Builders Association Vancouver (HAVAN). What he means is that to help builders get to “net zero” (a home that’s effectively neutral in terms of energy consumption and greenhouse gas emissions footprint), the Step Code identifies energy-efficiency targets that must be met and lets builders figure out how to meet them. Traditional building codes actually specify how to construct a building, which might inspire less innovation, creativity and flexibility.

“[Step Codes] are measurable, performance-based energy-efficiency requirements for construction that builders can follow and communities can adopt in bylaws and policies,” says Rapp. According to a July 2019 report by the BC Housing’s Research Centre and the Community Energy Association, 14 local governments have already implemented the BC Energy Step Code, while another 17 are in the process.

“To put this into perspective, a Step 5, 2032 house should be capable of meeting its heating needs with equipment equivalent to less than a third of the output of a typical gas fireplace,” says Rapp.

So, what needs to be done to successfully reach Step 5? The house would be “ready” to offset the small amount of energy consumed by its Step 5 specifications by adding some form of sustainable energy production, such as solar panels or a wind turbine, to make it a “Net Zero” consumer of energy.

“Not only will these net-zero-energy-ready homes be more comfortable, they will be healthier, more affordable to heat and about 80 per cent more energy efficient than those built today,” says Rapp. He explains that a combination of things is required to achieve the performance standards of each step: including the air exchange rate (which is subject to third party testing), enhanced insulation, mechanical equipment and home design. 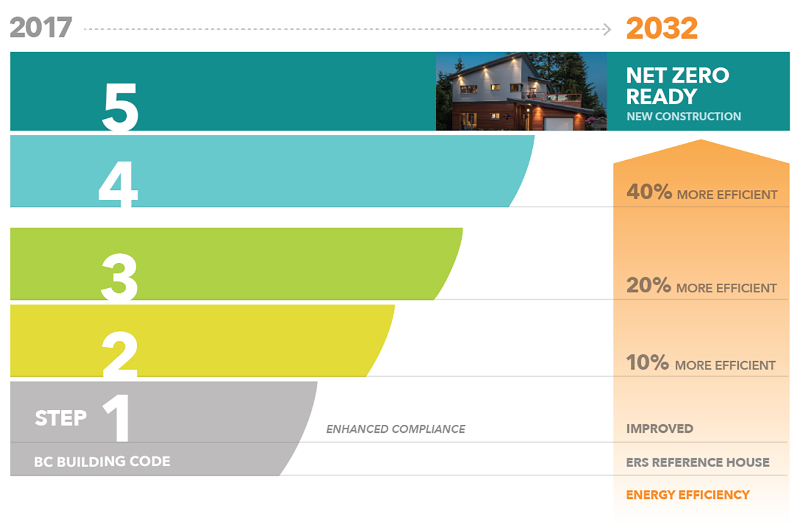 There has been some pushback amongst builders, admits Ray Smith, certified energy advisory services for the construction industry throughout the province. “Some builders resist it, because they are used to the traditional building methods,” says Smith. “Others, because they have to rethink the way they design homes.” The most common complaint, Smith says, is that clients often request lots of windows, which typically necessitate having energy-consuming artifical cooling in the summer. “The architect has to convince them to put in less windows to meet the Step Code requirements,” says Smith.

For other builders, Smith explains, the idea that they must use energy-modeling software and on-site testing to determine if their design and the finished building meet the Step Code’s requirements is just more time taken away from the construction process.

Smith himself is a passionate proponent of the Step Code, and believes that builders will eventually see that a traditional prescriptive-code home “is the worst-built home, because it covers only the bare minimum required for homes.”

Where Smith is based, the East Kootenay, is already mandated to adhere to Step 3. Smith says, “Most of Europe and the United States are ahead of us in terms of energy-efficient homes and the other provinces are watching what we are doing here in B.C.”

Danny Mauro of Discovery Dream Homes, a company that builds contemporary wood and log homes, says the Step Code is “a move in the right direction but it can also be overkill in some ways,” says Mauro. “We [in the log and timber homes industry] already have [to meet] a much more onerous R-value, which tests the conductivity of heat.” Discovery Dream Homes uses specially engineered, milled logs with double tongue-and-groove joinery, which combined with tight dovetail and gasketing, creates a highly energy efficient log wall.

Kelly Marciniw, vice-president of Pan-Abode International, which manufactures Western cedar log homes, incurs other frustrations with the Step Code, because the company builds in different cities: they have to follow Step Code 1 in some areas, while others (such as Pemberton) are mandated Step Code 3. Regardless, Pan-Abode homes are already naturally energy efficient.

“Aside from the fact that wood is renewable and sustainable, log homes offer better air quality because the wood stores carbons and regulates humidity,” says Marciniw, adding that many Pan-Abode homes are free of drywall and other man-made building materials like expanded polystyrene (EPS) or insulated concrete forms (ICF).

In the end, no one can argue the fact that energy efficient appliances, high-efficiency windows, and heat-recovery ventilation help increase a home’s comfort, lower heating bills and leave a smaller environmental footprint behind. By giving builders the flexibility to customize energy-efficiency solutions, step by step B.C. is helping build a greener future.