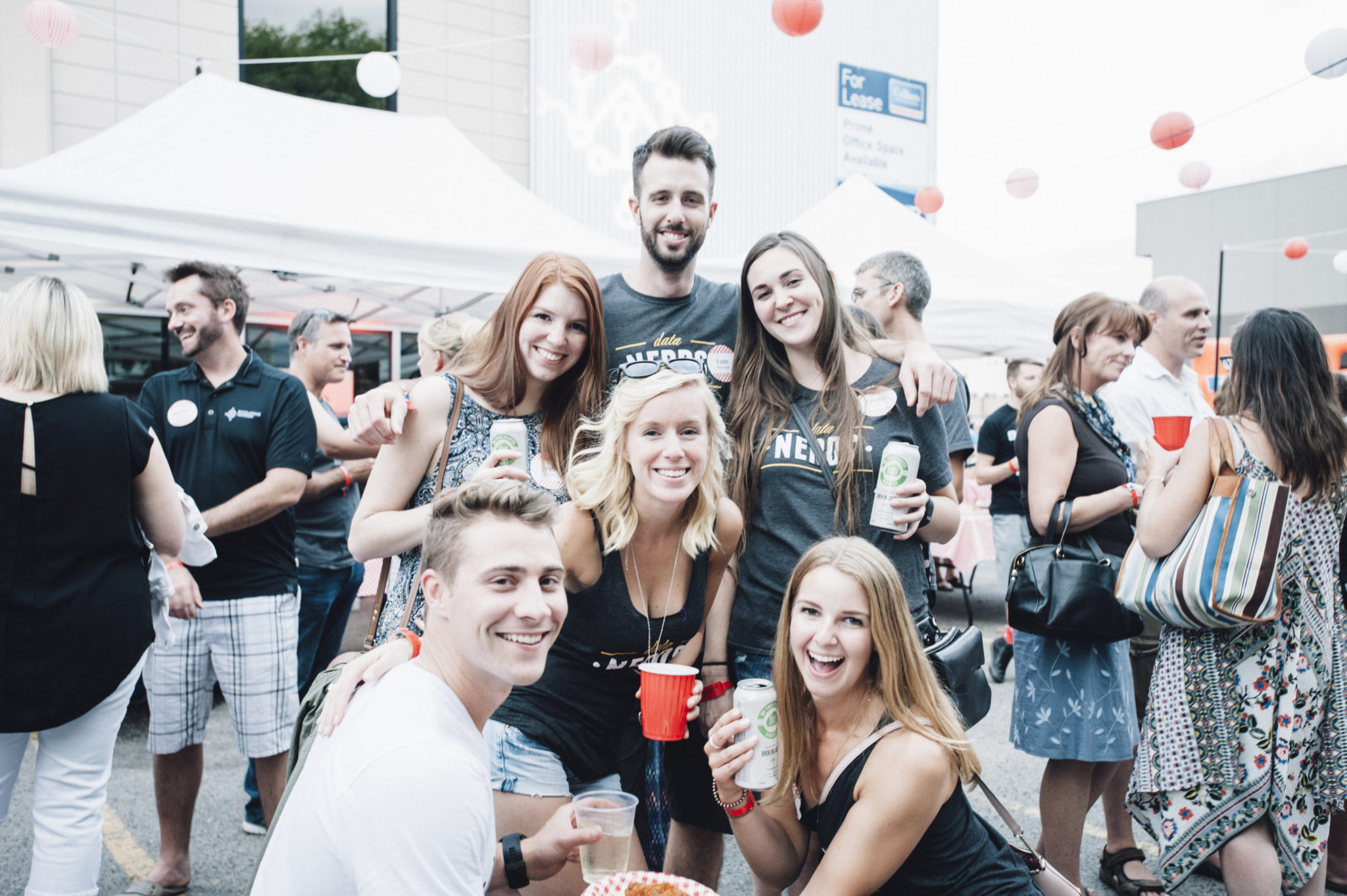 Vancouver may be considered the centre of B.C.’s tech sector, home to the majority of big company head offices and successful startups, but growing tech hubs are no longer just the domain of the big city. In fact, emerging tech centres throughout the province are changing the nature of work–and work/life opportunities–all over B.C.

It’s no surprise Prince George’s growing tech sector is centred on resource-based industries. “We have drone companies, fuel generation companies,” says Allan Stroet, executive director of the Innovation Central Society. “A lot of ideas are coming from noticing pains in the core economic drivers.” And a lot of people are coming to Prince George to escape pains in other regions. “Your lifestyle doesn’t have to be you at work, you in your car and you in bed,” Stroet says. “The City of Prince George is really pushing its recreational activities, affordable lifestyle and lack of traffic. We’re not as established as Vancouver or Kelowna, but the parts are there. We have the university, plent of fibre, which allows people to work from anywhere, and you can still buy a house for $300,000.”

Trail literally has the Midas touch when it comes to its emerging tech sector. The new MIDAS (Metallurgical Industrial Development Acceleration and Studies) facility in Trail is an MIT-certified fabrication lab that is gaining national recognition for its metallurgical expertise. “We do research and prototyping for clients and we’re experts in 3D printing, metals and woodworking equipment,” says Don Freschi, executive director of the Kootenay Association for Science and Technology (KAST). “When we first opened two years ago our clients were mostly local, but now there’s a big demand and larger companies are taking advantage. We have over 200 clients that come in and do their own prototyping, and six major corporate memberships. School districts are also training kids in here; it’s really blowing up.”

It’s one of the fastest growing tech regions in Canada, and a recent economic impact study shows just how much Kelowna’s tech scene is booming, anchored by successful startups like Bananatag and GetintheLoop. “We’ve had very consistent growth over the last five years,” says Accelerate Okanagan’s CEO Raghwa Gopal. “We’ve seen a lot of companies starting business this year, but where we’re really seeing a lot of growth is in companies doing half a million to $1 million in revenue. They’re doubling revenues and employee counts.”

The newly released Economic Impact of the Tech Sector report shows year-over-year economic growth of 15 per cent in the region since 2013. The Okanagan tech sector is estimated to contribute $1.67 billion to the region’s economy and comprises 693 businesses and 12,474 workers. “We’re starting to be noticed, so much more money is coming into our region,” Gopal says. “We’ve had more venture capital coming into Kelowna, and a huge community support system. Seven or eight years ago we were more focused on early-stage companies, but now we’re more focused on mentorship of growth-stage companies; more connections to markets and money outside of Kelowna and the Okanagan.”

Shane Austin, co-founder of CoLab in Kelowna, a co-working space focused on building community, describes Kelowna’s culture as creative, optimistic and forward-thinking, with a passion for creation. “We’re one of the most entrepreneurial cities in Canada,” he says, “with a higher than average number of self-starting businesses. When you have a growing city you have to have a lot of entrepreneurial people. And we’re attractive to freedom-loving people, whether they’re remote workers or creating a startup on their own.”

One of the driving forces behind in the influx of freedom seekers is the housing situation in the Lower Mainland. “We see it on a daily basis,” says Gopal. “We also get a lot of people coming from Calgary, and even the Prairies–Saskatchewan and Manitoba–but now our No. 1 source of people is Vancouver,” he says.

With UBC Okanagan and Okanagan College increasing seats in electronics and computer science programs, more skilled graduates are entering the labour market with ideas for tech startups too. “Our partners at Okanagan College and UBC Okanagan have a keen interest in bringing an entrepreneurial mindset to the student body,” says Austin. “At CoLab our efforts have focused around events that accelerate the culture of entrepreneurs. We’re a community-first co-working space and it’s not just a buzzword for us. A lot of organizations push community and collaboration, but we really help build people up and make connections that matter. We see a company or person doing great things and we’ll do everything possible to support them.”

Austin cites Yeti Farm Creative as one of its success stories. The animation studio, which started as one freelancer working remotely at CoLab, has grown into a 7,000-square-foot state-of-the-art 2D/3D animation studio creating work for shows like Angry Bird Toons. “Most new people here are looking for the opportunity to take the steps toward change in their life,” Austin says. “We are at the frontline of that.”

Penticton, which once suffered a continuous loss of young people seeking greener pastures, is now touted as the “Brain Gain” centre that is home to an ongoing exodus as one in four buyers in the South Okanagan region come from the Lower Mainland, according to the South Okanagan Real Estate Board. Plus, young people originally from the area are returning with their higher education and their young families in search of opportunities for a more affordable lifestyle. Penticton’s population grew by 6 per cent last year, compared to just 1 per cent growth in B.C. overall, as the city undergoes key improvements ranging from $6 million in airport upgrades and $300 million in hospital improvements, according to Jennifer Vincent, economic development specialist at the City of Penticton. Local entrepreneurs and remote workers have access to Cowork Penticton, which offers meeting room and hot desk rentals, as well as permanent workspaces. As well, there are several shard workspaces in town–one official coworking space that offers meeting room rental and hot desking as well as permanent workspaces and offices, plus another hub of small firms and entrepreneurs sharing a common work environment.

Victoria’s tech sector punches well above its weight: with 8 per cent of B.C.’s population, Victoria houses 9 per cent of its tech companies and produces 15 per cent of its tech revenue–over $4 billion last year, according to Dan Gunn, CEO of VIATECH (Victoria Innovation, Advanced Technology and Entrepreneurship Council). Chalk it up to an attractive lifestyle, a growing body of post-secondary students and grads, and a culture in which those who make it stick around to help those on the rise. “Successful founders become advisors and mentors here,” says Gunn. The city counts among its tech successes AbeBooks, which was purchased by Amazon, Power Measurement, which was acquired by Schneider Electric, and software firm MediaCore, purchased by Silicon Valley’s Workday. Up and comers include MetaLab, the user experience and design shop that created the design for Slack, and LlamaZoo, with expertise in 3D data visualization.

With technology entrepreneur Jack Crompton as the new mayor of Whistler, you can bet the region is poised to become even more attractive for tech startups. Already know for tourism tech startups like Guestfolio and Ridebooker, the region currently attracts a lot of online marketing entrepreneurs and remote workers, says Michelle Martin, co-organizer of the Whistler Entrepreneur Alliance and a serial entrepreneur who travels regularly between Vancouver, Squamish, and Silicon Valley. “There’s a real mindfulness vibe here. It’s a bit different than the usual startup hustle.  A lot of entrepreneurs are here to have an amazing lifestyle.” But with housing affordability a key issue, many are settling in Squamish and Pemberton, and commuting within the region or into Vancouver. Co-working spaces like Space in Whistler’s Function Junction, as well as the Aligned Collective and the Common in Squamish are providing support for remote workers and events for the startup community.

Revelstoke may attrace people for its balanced lifestyle, but it’s keeping them with it’s innovative approaches to business. “We moved to the Kootenays because we love the earth and want balance in life,” says Jean-Marc La Flamme, Founder of Mountain CoLab and vice chair of the City of Revelstoke’s Tech Team. “We’re hell bent on trying to integrate Smart City components, coworking and fabrication labs.” And tech startups will soon benefit from the region’s new regional investment co-op. “We’re focused on economic and environmental sustainability, and on companies that have the capacity to grown from local to global.”

Nanaimo’s tech sector has been growing by leaps and bounds, and not just because it’s an easy launching pad for those still bound to the Lower Mainland. “In the past 5 years we’ve seen phenomenal aggregate growth on our KPIs new jobs, investment and revenues have grown by 2,600 per cent,” says Graham Truax, interim executive director at the Innovation Island Technology Association, which offers a Venture Acceleration Program to help early-stage entrepreneurs with growth. Despite reported squabbles at the city level, the startup scene is thriving, due in part to the city’s ability to attract talent based on its affordability, lifestyle amenities, and proximity to the mainland.

TECH HUBS SUPPORTING ENTREPRENEURS AND SMALL BUSINESSES THROUGHOUT BC