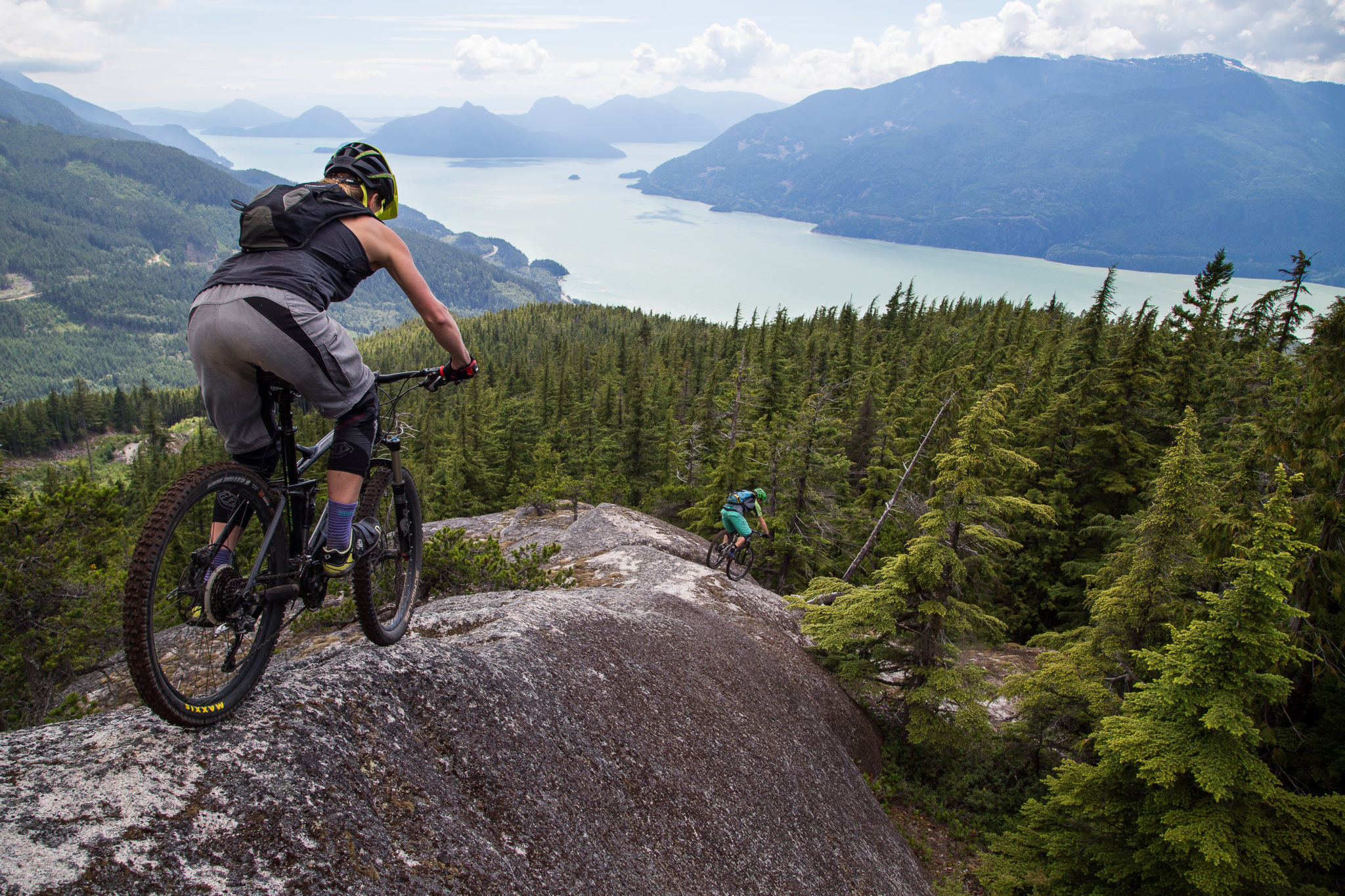 Riders enjoying the view as much as the rock slabs in Squamish, BC.

Cycling. It’s the new golf. Golf is still a favoured pastime for many second homeowners, but that new face peeking out from behind recreational property advertisements has traded in a golf bag for a carbon-fibre, dual-suspension mountain bike, or even a battery powered e-bike.

A bike can replace—or supplement—a gym membership and provide a wonderful social network of like-minded friends. And the best thing is that all you need to do is click open the garage door and start pedalling.

Western Canada’s mountain towns are as famous for their buff single- track and bucolic back roads as they are for double-black-diamond ski runs. While routes like the Trans Canada and Highway 97 through the Okanagan are to be avoided, there are deserted secondary roads with decent pavement, swooping turns, challenging climbs and dramatic descents. Former railway lines in the Okanagan (Kettle Valley Railway and southern Vancouver Island’s Galloping Goose Trail) have been converted to car-free, multi-use routes that are easy to pedal even if you haven’t ridden a bike since you were a teenager.

Whether you’re a novice cyclist merely looking for a bike rental to tool around Victoria’s Inner Harbour, or a hardcore competitor training for the BC Bike Race, take the time to stop for spare tubes or to replace a lost pair of gloves at any one of B.C.’s independent and locally owned bike shops. Chances are good that the staff can point you to trails that even Trailforks (the indispensable mobile- phone app) hasn’t picked up on yet.

Riding in the sage coloured foothills near Vernon, 45 minutes north of Kelowna, is similarly top notch, thanks to the North Okanagan Cycling Society. There are expansive cross-country trails close to Kalamalka Lake Provincial Park south of town. Trail-building activity has picked up in both Kalamalka Lake and Ellison Provincial Park and Silver Star Mountain was one of the first ski resorts to embrace mountain biking and hosted major national competitions in the mid-1980s along with the late, great 24 Hours of Adrenalin endurance event. In 2005, Silver Star embraced the highspeed world of downhill mountain biking, using its Comet high-speed lift to access dozens of kilometres of new trails, including the outrageously enjoyable Super Star, an ego-stroking descent where you just want to go faster and faster.

The trail that has everyone excited, however, is a new one that starts in a most unlikely place. Proving that perhaps cycling is indeed the new golf, Predator Ridge Golf Resort engaged the trail-building talents of Cam Sorensen, architect of many of the trails at the Silver Star Mountain Resort bike park, to create the four-kilometre Granite Trail, connecting the golf course with an extensive trail network in neighbouring Ellison Provincial Park. Built to take advantage of natural features like smooth granite outcrops and open slopes with outstanding views across Okanagan Lake, Sorensen constructed Granite Trail using the principles of flow. Instead of skidding and making deep ruts by riding straight down the mountain side, bikers swoop smoothly through banked corners, gentle rollers and even the odd uphill grade to keep them honest. Granite Trail is perfect for intermediate riders who probably find many of the other Predator trails a mite tame. The bike pathways leading from the golf course flow through fragrant stands of Ponderosa pine and are suitable for families and casual cyclists. More serious road riders will point their steeds east toward Highway 97 and Kalamalka Lake or head for Commonage Road, a back route into Vernon.

In the same way that high-speed quad chairlifts transformed the ski runs at Whistler Blackcomb so, too, has its mountain biking park. No longer do you need to grunt and sweat up several thousand vertical feet; just wheel your bike onto the chairlift, get off at the top and let gravity do the work. Vail Resorts is busy developing dozens of kilometres of new trail at the Creekside base on Whistler Mountain that will further cement the town’s reputation at the fat-tire forefront.

While the bike park grabs the ink in the mountain bike media, cyclists looking for more of a purist experience will want to tackle Comfortably Numb and Lord of the Squirrels, two of the longest, most challenging rides anywhere in the world.

There’s a healthy road biking scene here in Whistler as well, though given the fact that most routes include the Sea to Sky Highway, you might want to get an early start in order to beat the traffic or head for the West Side Road that borders Alta Lake. Gentler, less stressful riding awaits north of Pemberton and along the West Side Road that borders Alta Lake. For casual riders, the Valley Trail is an easy way to take in a lot of scenery in a short period of time.

Since the mid-1990s, the Kamloops mountain-biking scene has been featured in videos, magazines and splattered all over social media. This kind of mountain biking has become known as freeriding—descending and climbing the wide-open countryside where trails follow the contours of the land and create that magical flowing that riders from around the world are beginning to discover. The number of pro riders who have called Kamloops home at some point is truly astounding—everyone from freeride pioneers such as Brett Tippie and Olympian Catharine Pendrel, to dirt jumpers like Matt Hunter. Most of Kamloop’s best riding takes place right inside the city limits. Tune up your bike-handling skills at The Ranch bike park or tackle single-track in Kenna Cartwright Park. Caffeinate your ride with a stop at the Bicycle Café on Valleyview Drive. And 45 minutes north of Kamloops, Sun Peaks Resort features a bike park that has hosted numerous provincial and national downhill competitions. In August, the entire mountain is ablaze in a riot of colour as the dozens of varieties of wildflowers bloom.

Road riders will discover the well-paved roads for training, including the route from Heffley Creek to Sun Peaks, the Trans-Canada Highway west of town that follows Kamloops Lake out past Tobiano Golf and Country Club, and the Highway 97 route from Kamloops to Merritt. Experienced road riders can tackle Highway 97, which runs from Kamloops all the way to Vernon. 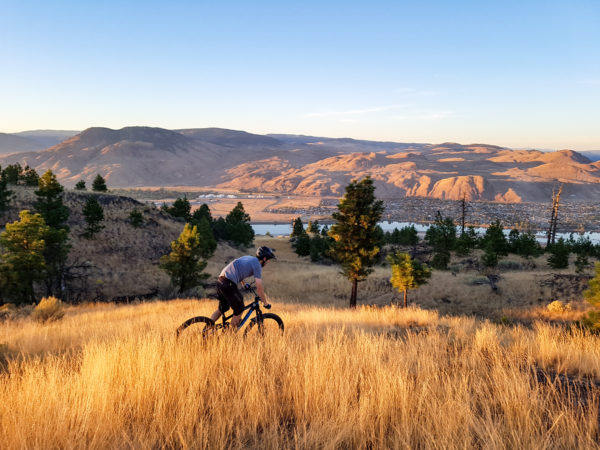 Considering a move to Vancouver Island? Make sure you pack along (or rent) a bicycle to explore thousands of miles of backroads, paved city routes (around Victoria) and perhaps the finest single-track mountain biking found anywhere on the planet. Easily reached by ferry from Victoria, the Gulf Islands are a favoured destination for what might be called credit-card touring where you pack a few essentials into a handlebar bag or backpack and discover secret beaches, local arts and crafts and a wine and culinary scene that will have you stopping at a local realtor’s office to see what the recreational property market is like. (The Cowichan Valley near Duncan and Ladysmith is similarly endowed with fine riding and eclectic shops and roadside attractions).

In Cumberland, mountain biking trails have even helped revive the local economy. Volunteers have hand-cut hundreds of kilometres of mountain bike trails suitable for riders of just about any ability level. And as word got around, young people from Calgary and Vancouver started purchasing property and relocating to this former coal-mining town. 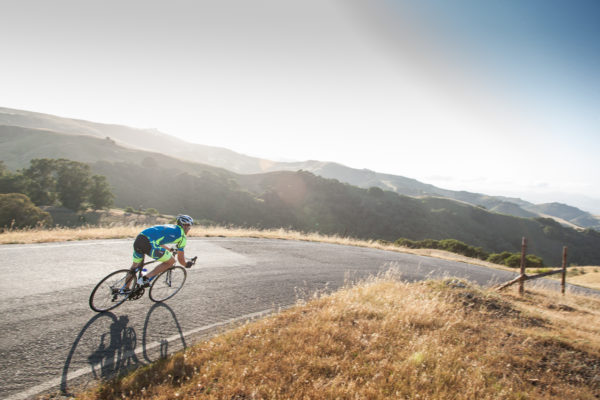 B.C.’s fourth-largest urban centre has some really fine riding, regardless of ability level. Bike pathways perfect for families of all ages wind along the Lake Okanagan waterfront and Kelowna’s newly rejuvenated downtown. The Mission Creek Greenway is a true locals’ secret; a wide, car-free, 18-kilometre trail that runs from the shores of Okanagan Lake all the way up to the base of uniquely shaped Layer Cake Mountain. On weekends, hundreds of local riders wind their way through the hills of southeast Kelowna on a network of paved secondary roads. Care to sip some Sauvignon or Shiraz while you ride? Lakeshore Boulevard passes three excellent wineries. As for mountain bikers, the sky’s the limit. Some of the most scenic riding is through charred remains of the 2003 Okanagan fire in Myra-Bellevue Provincial Park. Fifteen years later, second-growth evergreens are already two metres high in some places.

Mountain biking and slower family- oriented casual cycling are both popular in this ruggedly picturesque town at the head of Howe Sound. Volunteer trail builders have created some of the best single-track trails anywhere in the province. Three primary trail networks are located a short distance from downtown in the trendy Crumpit Woods subdivision, up at Quest University in Garibaldi Highlands and up in the Diamond Head area of Garibaldi Provincial Park.

Squamish has attracted hundreds of young families in the past decade, drawn by cheaper house prices than elsewhere in the Lower Mainland, as well as easy trail access. The dyke trails along the banks of the Squamish and Mamquam Rivers are ideal for towing toddlers in trailers or trail-a-bikes, and for kids making their very first independent cycling forays.