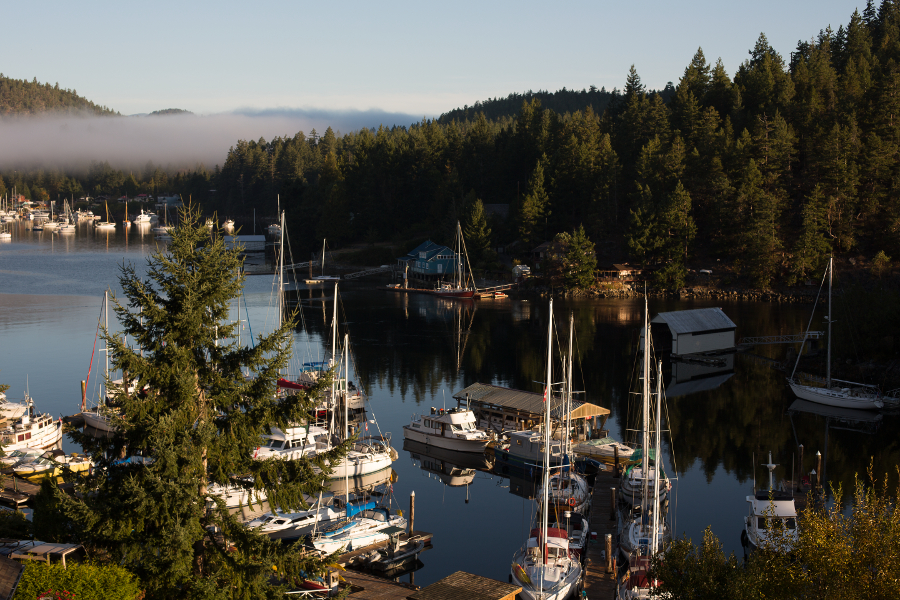 A rural treasure, just a stone’s throw from Vancouver, is a paradox of a place that could be the Sunshine Coast’s best-kept secret.

By Peter A. Robson

You take a ferry to get there (or perhaps a private boat or plane)–but it isn’t on an island. It’s confused so often with North and South Pender Islands (part of the Gulf Islands), mail is often redirected. And to further complicate matters, there isn’t actually a physical community called Pender Harbour.

What Pender Harbour is, though, is a seaside community of about 2,700 permanent residents and almost an equal number of part-time cottagers. While known collectively as Pender Harbour, the unincorporated community is made up of several residential hubs including Madeira Park (the village centre), Francis Peninsula, Garden Bay and Irvine’s Landing.

Visitors and residents typically arrive at Pender Harbour via a scenic 40-minute BC Ferries ride from Horseshoe Bay in West Vancouver to Langdale, then a pleasant 70-kilometre, one-hour drive up the winding Sunshine Coast highway. While the Sunshine Coast is on the B.C. mainland, there is no land access from Vancouver, as the steep-sided fjord known as Howe Sound is simply too rugged to make it feasible to carve out a road. The relative isolation of the region can be one of its draws.

The enclave also offers a well-protected harbour, good anchorage, numerous marinas and additional boating opportunities on five freshwater lakes. The Sunshine Coast is also part of the largest remaining temperate rainforest in the world, with an extensive network of well-marked trails for hiking and mountain biking. A short drive north takes you to Egmont and Skookumchuck Narrows Provincial Park where, after a tranquil 40-minute hike, you can witness the largest tidal rapids in North America, attracting thrill-seeking kayakers from around the world.

It sits within the traditional territory of the shíshálh (Sechelt) Nation. Historically, the relatively mild climate combined with easily available food—salmon, shellfish, berries, animals—and forests that provided shelter, clothing, boats and building materials, allowing the shíshálh to enjoy a relatively comfortable lifestyle. On his voyage of discovery in 1793, Captain Vancouver actually missed the well-protected shelter of Pender Harbour; it wasn’t until 1860 that Captain G.H. Richards surveyed the harbour and named it after one of his officers, Daniel Pender.

A comfortable lifestyle continues to this day. Access to Vancouver, local amenities in Gibsons and Sechelt, the spectacular scenery, mild climate and a healthy and safe rural setting are among the draws for newcomers like April Solonyka and Jimmy Button. The couple moved from Whistler to Garden Bay three years ago. “It got way too expensive to live in Whistler and this was everything we’ve ever been looking for,” said Solonyka. “For 15 years we’d been camping at nearby Klein Lake, so we knew the area. We were only able to move because of reasonable land prices. Our property is almost three acres at Sakinaw Lake, surrounded by forest. We love it.”

“More and more people are choosing to sell their homes and escape the hustle and bustle of big city life,” says local realtor Alan Stewart, for places “where they can take advantage of the significantly lower cost of housing and a more laid-back lifestyle.”

Even if it’s in a place that, technically, isn’t even a dot on the map.