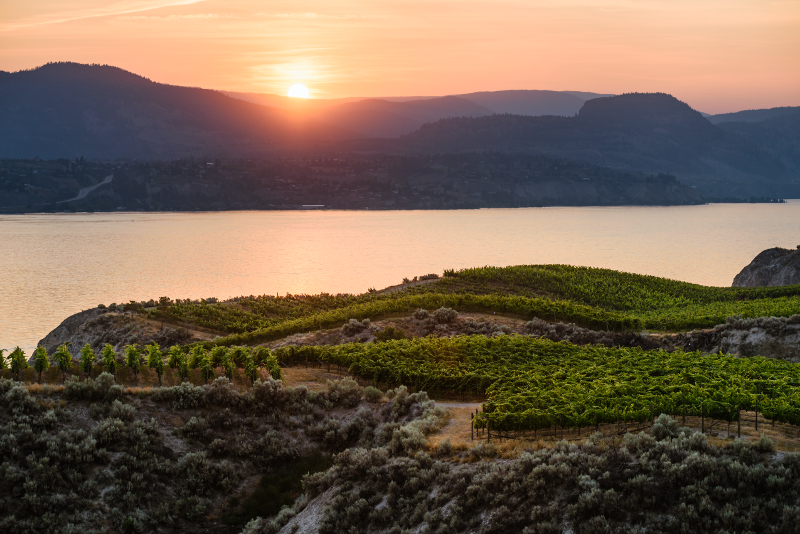 This wine- and food-centric Okanagan gem community has a new lease on life, thanks to the recent revitalization of the historic seat of the community.

Moving his family to Naramata is a homecoming of sorts for Ned Bell. The acclaimed chef, cookbook author and environmental advocate cultivated his reputation in Vancouver but he was born and raised in nearby Penticton, and has returned to the region frequently throughout his adult life.

Together with a team that includes his wife, public-relations specialist Kate Colley, Bell refurbished and reopened the storied Naramata Inn, which has stood for more than a century at the foot of the town’s main road. By way of explaining the welcoming nature of his neighbours, Bell says, “My son, who’s 10, has made more friends here in the last couple of months than he made in eight years in Vancouver.”

Many towns pay lip service to the notion of community, but Naramata puts it into practice–and it technically is a community, owing to its small population. (The most recent census, in 2016, tallied barely more than 1,000.) Located on the eastern shore of Okanagan Lake, it was founded in 1907 by prospector John Moore Robinson, whose family home later became the Naramata Inn. Since then, Naramata has maintained a reputation as an agricultural wonderland, where the trees in its sweeping orchards bear apples, cherries, peaches and more. And because Naramata is part of the Okanagan, it’s also chock-full of vineyards: the Naramata Bench itself (the lands between Penticton Creek and Okanagan Mountain Park) is home to more than 40 wineries within a 20-minute drive.

Thanks to the increasing popularity of the Okanagan Valley, real estate prices have risen, although here they remain a relative steal; a 1,356-square-foot two-bedroom rancher with lake views was recently listed for $559,000. “It’s definitely busier now, especially in the summer,” says resident Dawn Lennie. While long-time locals are loath to see the community grow too much, Lennie says “there really isn’t space for it. The charm and appeal of the Naramata Bench is that it’s largely a farming community–mostly five-acres-plus parcels along the bench and then just a little village.” Lennie, who owns and operates Legend Distilling with her husband, Doug, and has lived in Naramata since 2005, says, “We absolutely love it here. We wouldn’t trade it for anything.”

Echoing Lennie’s enthusiasm, chef Bell says, “We’re surrounded by vineyards, by orchards, by farms and farmers, by artisans.” At his revitalized The Restaurant at the Naramata Inn, he’s creating seasonal and sustainable hyper-local dining options for locals. “It’s magical in its placement,” he says of the community he now calls home.