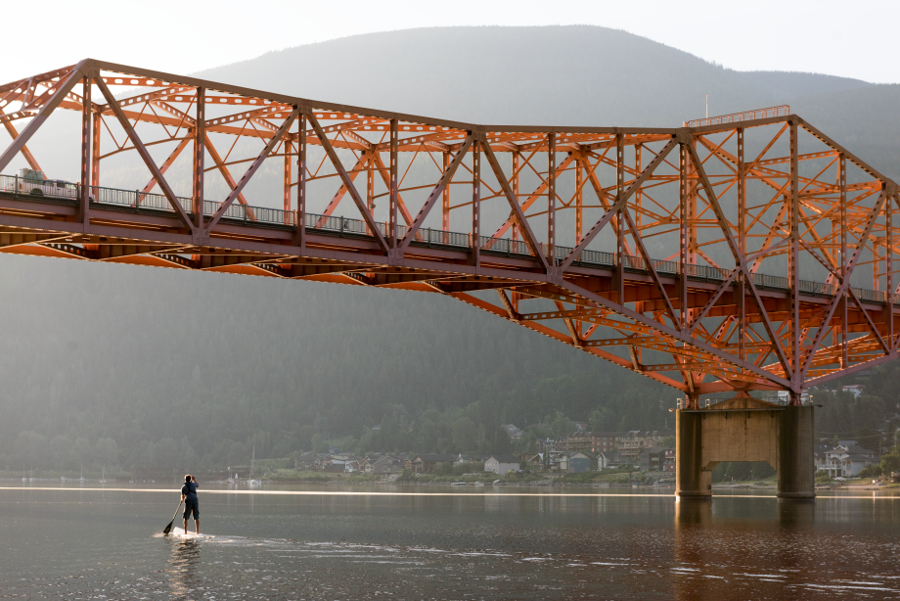 A paddleboarder on Kootenay Lake in Nelson. Destination B.C./Kari Medig

The planet needs it. Citizens expect it. So forward-thinking B.C. communities are putting sustainability and environment first, and here’s a glimpse of what some towns, villages and small cities have done to reduce their footprints and make city streets and neighbourhoods more inclusive, earth-friendly, and safe.

Nelson: Innovation at a city-owned utility

This city on the shores of Kootenay Lake prefers to do things differently, like creating its own utility. Nelson Hydro dates to 1896, and is considered B.C.’s first hydroelectric green energy plant. This utility, which provides renewable electricity to more than 10,000 customers, has allowed Nelson to address GHG emissions in creative ways, such as incentivizing rate payers to undertake home energy retrofits.

When the city decided to build Canada’s first solar garden, an array of panels in a central location, it gave customers the opportunity to invest in the project on a panel-by-panel basis. In turn, they would receive a credit on their hydro bill proportionate to their investment, just as if the solar panel they bought was on their very own roof. It means that those who are unable to afford whole solar panel systems, as well as renters or homeowners with shaded or unsuitable roofs, can still access solar energy. It turns out that renewable energy can be a community undertaking. nelson.ca/DocumentCenter/View/5046/FAQs-Community-Solar-Garden

For the past decade, Harrison Hot Springs has operated with a net-zero carbon footprint. Back in 2011, this Fraser Valley community took home a gold medal in the race to be the first among B.C. municipalities to achieve carbon neutrality. As a member of the Federation of Canadian Municipalities Partners for Climate Protection and a B.C. Climate Action Charter signatory, Harrison has achieved the goal two years ahead of the provincially targeted date, through a combination of reducing corporate greenhouse gas emissions (GHG) and balancing the remainder with qualified GHG offsets. For its efforts, the village earned a 2011 Union of B.C. Municipalities Community Excellence Award for Leadership & Innovation.

As one of the most expensive postal codes in which to live in Canada, Whistler had the foresight to realize years ago that housing affordability would be one of the resort municipality’s biggest long-term challenges. Housing affordability is nothing new for tourism-based communities that witness real estate prices and rents spiral beyond what service workers can realistically afford to pay. This resort municipality did something about it.

In 1997, the Whistler Housing Authority (WHA) was formed, based on a simple premise: people who work here should be able to afford to live here. At the same time, a new municipal bylaw required developers to either provide staff accommodation or pay into a municipal housing fund. WHA quickly got to work and started buying land. By 2012, the authority had built more than 1,800 non-market units, a little more than half of them for sale and the remainder for rent.

Today WHA owns and manages more than 2,000 non-market housing units, a big reason why this international, four-season destination can sustain people who serve in restaurants, load chairlifts and mow lawns. After all, a community that looks out for everyone is a community that thrives.

The costs of shipping can add as much as 15 per cent to grocery bills for residents and restaurants at the end of the Pacific Rim Highway on Vancouver Island’s West Coast. Eat West Coast was started in 2018 by the Clayoquot Biosphere Trust to support and grow local food security. One of the ways they’re doing it is through The West Coast Preservation Program, which provides opportunities for community members to learn from their Tla-o-qui-aht and Ahousaht neighbours about traditional Indigenous food gathering and preserving techniques as well as the seasonal abundance of the West Coast, from wild mushrooms to smoked salmon. The non profit also supports and hosts workshops for local families on gardening, beekeeping and backyard chicken farming.

At the same time, the Tofino Ucluelet Culinary Guild is helping to connect chefs, families and grocery stores with Vancouver Island farmers, foragers and fishers. The goal is to get more of what’s grown and harvested locally into local kitchens. It makes sense and that’s food sustainability, West Coast style.

Gibsons: Nature as a valuable asset

Municipalities often think of infrastructure as only pipe, sewers, street lights and roads. But not Gibsons. This Sunshine Coast town considers nature its most valuable infrastructure asset. For example, the Gibsons Aquifer provides water storage and filtration; creeks and forest help manage rainwater and run-off; and the foreshore acts as a natural seawall–some people call them “ecosystem services.”

This way of thinking is a game changer when it comes to planning and development. In fact, the town was the first community in North America to integrate natural assets into its asset management and financial planning. In 2019, the Canadian Society for Civil Engineering awarded Gibsons for Government Leadership in Sustainable Infrastructure. The following year, in 2020, Gibsons built on these pioneering efforts with a Tree Preservation Bylaw, an important first step in the development of an Urban Forest Plan. In Gibsons, every tree, stream and wetland matters.

Though this city is in the heart of B.C.’s fossil fuel energy sector, Fort St. John is a municipal leader when it comes to promoting and demonstrating innovative green building design and technology. For example, its new net-zero RCMP Detachment is the latest sustainability effort that makes this northern B.C. city stand out. The project builds on a 2015 investment that had the city constructing what, at the time, was the northernmost Passive house in Canada. (A Passive house is a virtually airtight dwelling that gets most of its heat from the sun, so well insulated that it demands minimal additional energy to heat and cool.)

Following this award-winning project, Fort St. John leveraged its Site C Project Community Measures Agreement with BC Hydro to build a 50-unit Passive house-certified apartment complex. Why stop there? This Peace River country city has built a micro-hydro generating station at its sewer outfall facility–proving that just because your bread and butter has been oil and gas, it doesn’t
mean your city can’t think outside of that box.

Transportation accounts for over 60 per cent of this south Okanagan city’s greenhouse gas emissions, like a lot of Canadian cities of similar size. One way that Penticton is tackling its emissions is by getting people out of vehicles and onto the seat of a bike or e-bike. It’s a win-win for the climate, and also for a healthier, greener community. That’s the rationale behind the new Lake-to-Lake cycling pathway. To get it done, city planners reclaimed some asphalt formerly dedicated to cars and created 6.5-kilometre route that will provide residents, commuters and visitors with a safe and accessible separated bike lane. It’s another reason for people to get out of their vehicles and explore this sunny lakeside city on bikes and e-bikes, all the way from Okanagan Lake to Skaha Lake.

It won’t stop there. Penticton is nearing completion of a new Community Energy and Emission Plan. It will contain a detailed list of actions over the next five years that will target further lowering of emissions generated by transportation, as well as from buildings and solid waste. penticton.ca/cycling

As a signatory to the Provincial Climate Action Charter, Ucluelet has already attained Level 3 carbon neutrality through the purchase of verified carbon assets from offsetters.ca.

This logging, fishing and tourism town has already installed four Level 2 electric vehicle (EV) charging stations, supporting private sector investments in charging infrastructure. As of 2020, visitors and locals can now plug in at a total of nine Level 2 chargers and two DC fast chargers, including stations at Black Rock, the Pacific Rim Visitor’s Centre and the Ucluelet Community Centre. This is a big leap forward for sustainable transportation, making it feasible for travelers to visit Ucluelet and Vancouver Island’s rugged West Coast by electric vehicle.

One-third of the garbage dumped at the Campbell River landfill is yard and food waste. Think about it: that’s a lot of organics taking up landfill space and releasing methane, which is more than 30 times more powerful a greenhouse gas than carbon dioxide. Veggies left to decompose in the landfill are also a missed opportunity that every green thumb wants: composted soil.

A new regional organic composting facility will turn this waste into a windfall of nutrient-rich soil, and also take a big bite out of landfill GHG emissions. When the facility is fully operational, the city hopes to be diverting a large chunk of the estimated 19,000 tonnes of organics that are left to rot and off-gas methane at the Campbell River landfill every year. That’s what
you call turning a waste into a win.