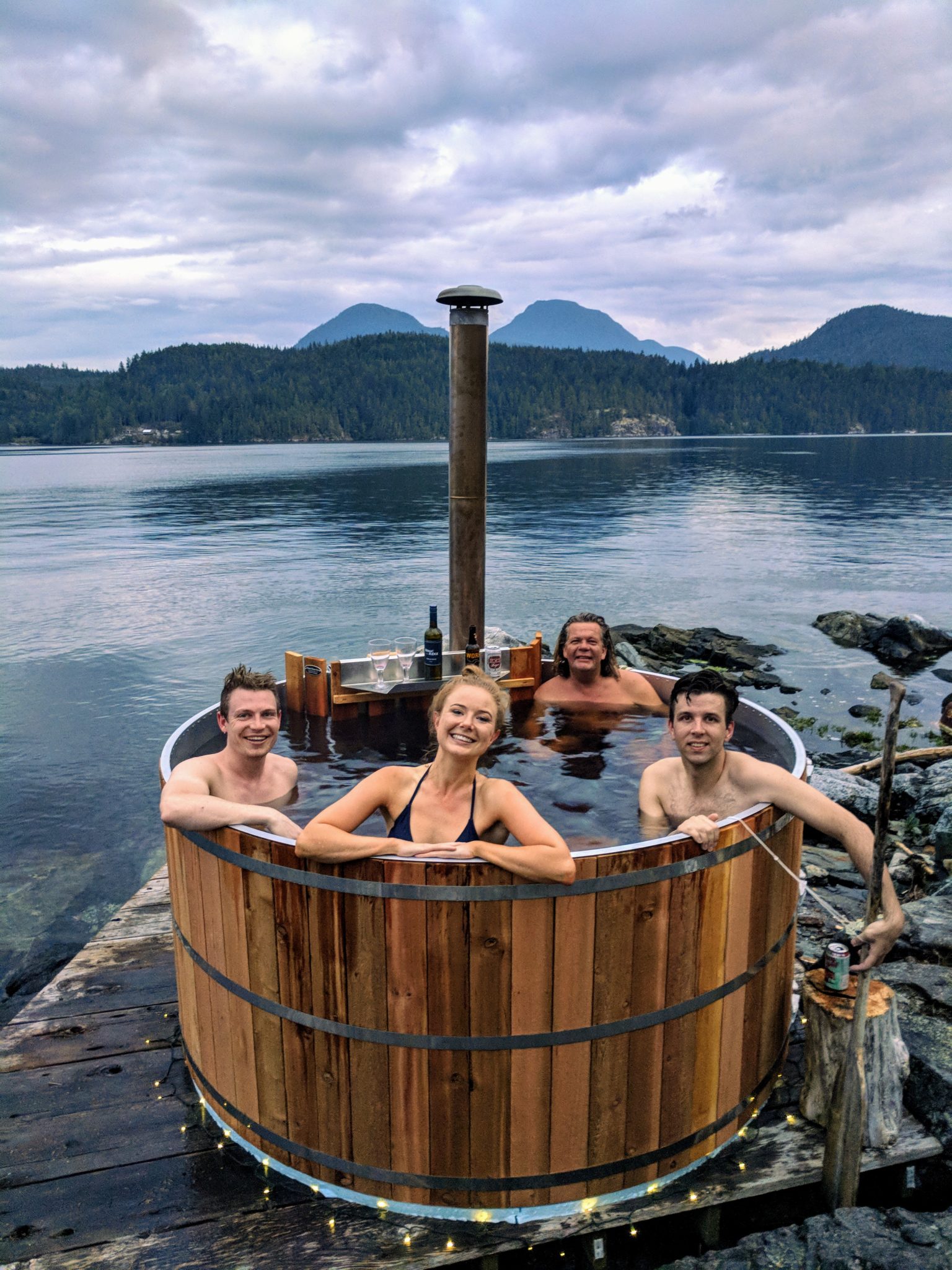 When Colleen Dragan and her husband bought their cabin on Gambier Island more than a decade ago, one of the must-haves was a hot tub in which to relax and enjoy their fabulous views of Howe Sound and the surrounding Coast Mountains.

With no electricity in their area of the island, a tub heated by wood was the ideal choice.

“We are on solar power—and have a generator—but an electric hot tub was not an option,” explains Dragan, who spends summers with her family at the Gambier property.

In addition to the appeal of wood-fired heating, Dragan loves the look and feel of the tub. “I really like that it feels natural, not like plastic,” she says.

The aluminum tub, which fits five comfortably, is wrapped inside and out with 100-percent indigenous Western red cedar that is rot-resistant. The classically simple design blends in beautifully with the landscape and is easy to use.

“It doesn’t take long to heat and uses the amount of wood you would use in your fireplace. It doesn’t take much more wood to keep it going,” she adds.

The only downside Dragan has experienced is that the tub can overheat if you’re not accustomed to using it.

“That’s a problem for us because we have to be careful with water use, so we can’t really just add cold water if it overheats,” she says.

Sales of wood-fired hot tubs are on the rise thanks to the low upfront and operational costs and their off-the-grid appeal, says Doug Brubaker, president of Forest Lumber and Cooperage in Sooke, B.C.

“We have seen growth of between 50 and 60 percent in sales of our cedar hot tubs over the last few years,” says Brubaker, whose company has been selling Western red cedar wood-fired hot tubs since 1976.

“Largely, these tubs are purchased by people with recreational properties and people living outside of large urban centres. Besides selling well across North America, they are popular in France, the U.K. and Australia.”

Some red cedar tubs rely on a submersible aluminum stove to heat the water.

“The stove is surrounded by water except for the loading door for the firewood,” explains Brubaker. “Any dry, seasoned wood works well and produces nearly no smoke. A four-seater takes roughly two to three hours to heat. We tell people to check every 45 minutes or so and if it’s cooling down, load it up with wood.”

And that woodsy scent also attracts enthusiasts. Anyone who’s sat in one of these wood-fired tubs knows that it’s very peaceful because there is no noise from jets.

These hot tubs also seem to provide an opportunity for users to slow down and commune with nature, say Eric and Wendy Hottz, owners of Sechelt’s Alumi-Tubs Inc.

“There’s something about these tubs that naturally makes one de-stress and chill out,” says Wendy.

For years, the Hottzs spent their summers on Thormanby Island on the Sunshine Coast. Because the remote island was off the grid, Eric Hottz decided to build a wood-fired hot tub, which he constructed out of marine-grade aluminum and wrapped in locally sourced cedar.

“Eric built it out of aluminum so that it would never leak,” says Wendy. “That was 18 years ago and it’s still like new. People started asking Eric to build one for them and in that first year we sold four.”

“There’s something about these tubs that naturally makes one de-stress and chill out.” –Wendy Hottz

The Hottzs now sell these pre-assembled tubs to customers across Canada, in the U.S. and as far away as Switzerland.

Most wood-fired tubs are well insulated so they retain the heat.

“The following day, it will only take an hour to heat,” Wendy adds. “They are also very clean. You only have to empty and refill it using saltwater or freshwater.”

–with files from Lynn Mitges

• In most cases, a quality cedar hot tub will cost less than a comparable model made of acrylic or fibreglass-reinforced plastic that has the same features.
• A conventional tub will start to deteriorate after seven to eight years, while a cedar wood-fired tub can last between 20 and 25 years.
• A handcrafted cedar tub takes about six weeks to deliver. A traditional hot tub is typically stocked in stores or by dealers and often is available right away.
• Installation of wood-fired tubs varies from some models that are pre-assembled to those that are completely assembled in about four hours. A conventional hot tub may take up to eight hours to assemble.
• The heating process for an electric heated tub is shorter compared to a wood-fired tub although a wood-fired tub costs less to operate and is quieter.
• Although wood is a renewable resource, critics argue the smoke contributes to air pollution.
• Wood-fired tubs can get much hotter than electric tubs. Users must be cautious as temperatures over 40C can pose health risks.